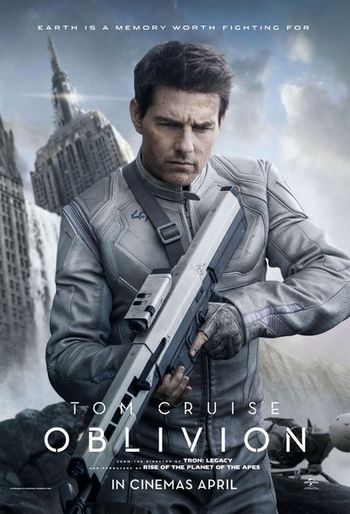 “Oblivion” is not a fun movie to watch. The endless stream of borrowed visual and episodic elements from other sc-fi movies constitute an elephant in the room. A problem of being reminded of other [better] sci-fi movies is that it prompts you to mull over how shoddy the one you’re watching really is.

Co-writer/director Joseph Kosinski based the film on a comic book he wrote with Arvid Nelson. It shows. No audience member would ever imagine that the skeleton that passes for a story was based on a novel. An idea for a story exists, but the movie is little more than an outline for a narrative that got thrown in the oven far too soon.

Tom Cruise is watchable if not convincing as Jack, a generic Omega Man whose job it is to fix-or-repair-daily the fast flying drones that buzz around what’s left of Earth in the year 2077. 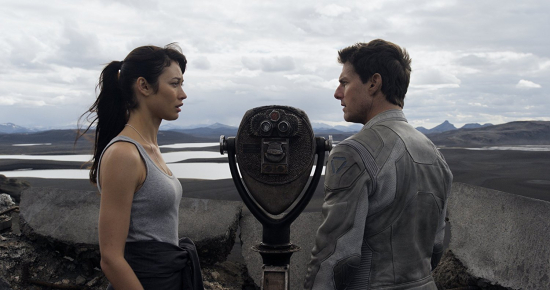 Narration informs us that the notoriously unreliable people of Earth waged a “victorious” battle against an army of invading aliens called Scavengers. By the looks of what remains of the planet, it’s safe to say that humans lost both the battle and the war. Needless to say, there isn’t much left of the planet to "salvage." Why anyone would waste resources looking after such a dust heap as we witness here is beyond the imagination. The movie doesn't fill in any blanks.

Considering that Cruise last played “Jack” Reacher, the filmmakers missed a memo that it might have been a good idea to change the character’s name, lest Tom Cruise be made even less specific than he already is. Richard Gere take note, Tom Cruise has officially filled your shoes.

Jack lives in a small but deluxe skyscraper apartment — dubbed “Skytower” — with his “effective” work partner Vika (Andrea Riseborough). A fancy transparent swimming pool is the icing on the cake. Vika spends her time checking in with their mother ship mission commander Sally (Melissa Leo), a patronizing matriarch with a twangy accent — think, a female version of George Bush Jr.

Vika plays housewife while Jack fiddles around on the Earth’s surface with drones that want to kill him as if he were one of the “Scavs” that hide underground in an oppressed community of “Mad Max”-styled survivors. Jack has secrets of his own. He has a little remote cabin where he goes for alone-time to listen to vinyl rock ‘n’ roll records; Led Zeppelin is a favorite. Jack suffers from flashbacks involving another woman. Could it be that he was brainwashed by some one or some thing?

Riseborough’s character is never allowed to take hold. None of the characters, with the exception of Jack, is given much substance to work with. Most squandered is Morgan Freeman as the Scav’s leader Beech. Freeman gets a total of about eight-minutes of screentime, and that’s it. It’s as if the story were being told upside-down. If Freeman’s character were the protagonist, then the movie might have had somewhere to go. As it is, the best thing “Oblivion” has going for it is its production design and Icelandic landscapes.

It’s not like Tom Cruise hasn’t made a great sci-fi movie in his career; “Minority Report” is a masterpiece. “Oblivion,” on the other hand, is just what the title portends.