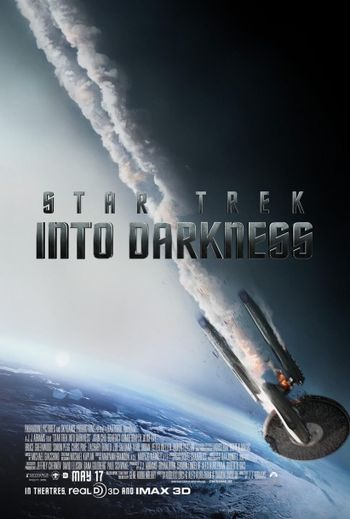 “Star Trek Into Darkness” is a lot of movie. It gets personalities and dialogue right, but lets gigantic plot problems slide around like ocean-bound rubber duckies on an oil slick. The tremendous effort that the screenwriters, filmmakers, and actors put into harmonizing the film’s gently cheesy tone with Gene Rodenberry's original 1966 television series is spot-on. Like its cinematic prequel, the humor walks a fine line between dry wit and camp — between old-fashioned and hip. Crisscrossing subplots however, get messy.

Fans of the original series that launched multiple TV versions and [now] 12 films are rewarded with a returning cast of actors from the current J.J. Abrams relaunch, who resemble younger versions of the iconic actors. Leonard Nimoy and William Shatner ought to be gratified. It might seem counter-intuitive to imagine Chris Pine as a younger William Shatner, but the talented actor makes it plausible, even recognizable. The same rule applies to Zachary Quinto’s earnest incarnation of Mr. Spock. Eyebrows and pointy-ears aside, Quinto has Spock’s delivery and manner down to, well, a science.

The film’s first act sets a high mark of suspense, spectacle, and character interaction that gradually fades as the movie grinds into its truncated finish. Spock gets beamed inside a boiling volcano on an alien planet called Nibiru; his mission is to set off a device that will freeze the interior of the lava-spilling mountain, thus saving the planet’s not-so-friendly inhabitants. Spock’s red heat-and-flame resistant suit is a nice touch of costume-design.

If you’ve ever wondered what it might feel and look like inside an active volcano, you’ll get a pretty good idea watching it on a 3DIMAX screen. Not that the 3D is better than marginal, but the special effects are convincing. A tacky exception occurs in a later scene looking through the front windows of the U.S.S. Enterprise at what are clearly painted models of three crewmembers. How this ridiculous clip avoided the cutting room floor is anyone’s guess.

In his imitable the-good-of-the-many-yada-yada way, Spock is at peace with the personal sacrifice it seems he must make for the sake of the endangered aliens. No amount of shouting by Kirk at Spock via radio transmission about his “life” can dissuade the ever-logical Vulcan from seeing his mission through. The ongoing struggle between Kirk’s emotionalism and Spock’s strict adherence to rationality is a chestnut that somehow never gets old. The ever-deepening friendship between Kirk and Spock serves as the movie’s strongest hook.

Kirk’s handling of the Spock/volcano incident isn’t up to snuff for a Starfleet commander, especially one who took over responsibility for the ship from his by-the-book dad Christopher Pike (Bruce Greenwood). James Tiberius Kirk still has much to learn. Several ethics lessons come into thematic play for audiences looking for more than just chases sequences though space. Transforming the U.S.S. Enterprise into a weapon of war comes under some microscopic analysis.

On Earth, a meeting of Starfleet muckety-mucks which includes Kirk, his dad, and Admiral Marcus (Peter Weller) comes under a devastating assault by John Harrison (Benedict Cumberpatch), an ex-Starfleet officer gone bad — real bad. The nefarious Harrison has a secret that he takes with him when he retreats to the Klingon home terrorist, the planet Kronos. For his part, Peter Weller — with his steely alien blue eyes and imposing presence — briefly steals the movie, exposing a series of flaws in the script relating to his character’s subplot and that of Marcus’s daughter Carol (Alice Eve). After smuggling herself onboard the Enterprise, Eve’s character stands around looking for something to do.

Betrayals and reversals follow involving the Klingon-connected Harrison. Explosive action sequences featuring epic battles between the Enterprise and a mammoth warship don’t make as much sense onscreen as they must have on paper. Nonetheless, watching the U.S.S. Enterprise hit warp-drive and vanish into the vastness of space on an IMAX screen is something every kid that sees this movie will remember for the rest of his or her life. The “Star Trek” franchise has its weaknesses, but it’s still the best thing going in the sci-fi genre.

Listed below are links to weblogs that reference STAR TREK INTO DARKNESS: