« MUCH ADO ABOUT NOTHING | Main | WHITE HOUSE DOWN » 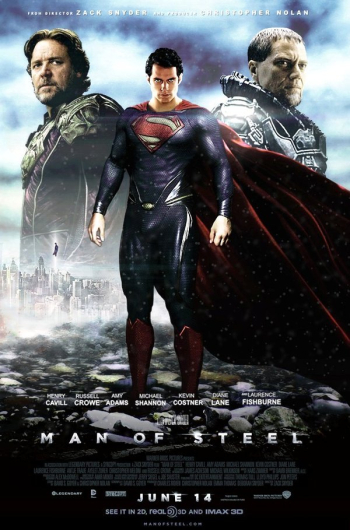 “Man of Steel” delivers a fresh approach to the shop-worn Origin of Superman narrative (originally published in 1938). Alas, fresh is not enough. State-of-the-art special effects are deployed to deliver the double theme of xenophobia manifested through eugenics — reference planet-Krypton baddie General Zod (Michael Shannon), who plans to repopulate his planet with the aid of Superman’s blood — and America’s anti-immigrant bigotry, turned sideways against resident alien Clark Kent. The movie emphasizes that Superman is not human, much less the red-blooded American he outwardly appears to be (and has been depicted as in previous iterations).

Unfortunately for viewers, the film’s collectivist themes are so overwhelmed by spectacle and pedantic storytelling that most audiences will barely notice their presence — blame Christopher Nolan and David S. Goyer for the flat story and by-the-numbers script, respectively.

Other casting choices don’t go over so well. Russell Crowe flails in his role as Kal-El’s powerful father Jor-El. Here’s a part that Ralph Fiennes or George Clooney could have hit out of the ballpark with panache to spare. Sadly, we get the overbearing Crowe giving line readings that sound like he's got a marble in his mouth. Momentous visitations between Jor-El’s immortal soul and the corporeal Kal-El provide old-fashioned exposition, which informs the young outlier about the choices he must make toward fulfilling his hero’s journey.

For her leading lady role as Daily Planet journalist Lois Lane, Amy Adams plays the character ahead of the beat. Every line she delivers seems like an end-run to a foregone conclusion. We never get to see her gears turn. Of course, there’s the non-brunette issue. Why wasn't a more obvious choice — such as Michelle Williams or Jennifer Lawrence —made? Baby Kal-El grows up after being jettisoned on Earth in the wake of the destruction of his home planet, Krypton, by Zod. Kal-El’s adoptive father, Midwest farmer Jonathan Kent (Kevin Costner), delivers a stern warning to Clark not to use his super-human powers to save people lest he be outed as some freakish alien. Conformity is the key to survival in America. Naturally, a school bus accident on a bridge prompts the adolescent Clark to defy his patriarchal guardian’s counsel. Clark Kent has his own sense of ethics to answer to. However, it isn’t until General Zod and his army invades to hold Earth hostage in exchange for Kal-El that Clark makes his transition into the Man of Steel. We are told that the “S” on Superman’s chest is a Krypton symbol for hope, rather than the apparent first letter of his super hero moniker. Superman’s ability to use his eyes as a laser isn’t explained, but it gives the movie a kick in the sweet spot every time he turns on the fiery red beam during ferocious battles with Zod and his troops.

Michael Shannon’s Zod makes the movie happen more than the endless stream of falling skyscrapers that Zack Snyder is compelled to showcase for fear that the narrative isn’t strong enough without so much cataclysmic destruction on display. He has a point. But it didn’t have to be this way. Superman is caught between two enemies, the earthlings that threaten to persecute him like the latest King Kong — another version of an undesirable immigrant — or the insane militarized bully from his home planet.

Of course, it's a tough genre. As with all other comic-book movie adaptations — save Sam Raimi’s “Spider-Man” 1 and 2 — “Man of Steel” never connects tone, rhythm, and theme into a unifying whole. That isn’t to say it isn’t an entertaining movie; it is. It just doesn’t leave you walking out of the cinema with that breathless sense of transformative wonder you hope for as an audience member — and need to bring you back.