« FREDDY GOT FINGERED — CLASSIC FILM PICK | Main | MUCH ADO ABOUT NOTHING »

NOW YOU SEE ME 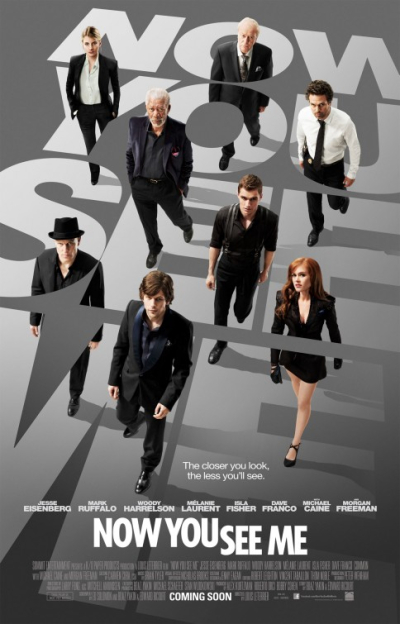 This convoluted shell game of a movie loses track of its own objectives. What starts out as a promising marriage of different approaches to magic — a mentalist, a female escape artist, a sleight-of-hand wiz, and a pickpocket — for the purpose of a complex crime spree, succumbs to poor plotting amid an over-populated cast of barely sketched characters.

A by-committee script (written by three screenwriters) leaves plots holes galore to be caulked by director Louis Leterrier (“Clash of the Titans”). Needless to say, Leterrier can’t do much to mitigate the script’s preference for flash over substance or character development. The spectacle wears out its welcome. 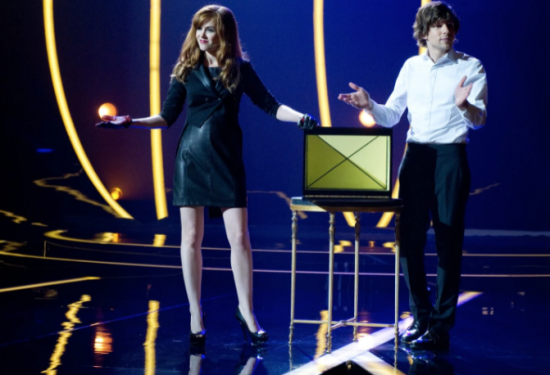 Con-men magicians J. Daniel Atlas (Jesse Eisenberg), Merritt McKinney (Woody Harrelson), Henely Reeves (Isla Fisher), and Jack Wilder (Dave Franco) are brought together by some unseen hand to create an act called “The Four Horsemen” [of the apocalypse?]. Their ostensibly one-off Vegas stage act involves “robbing” a French bank and gifting their audience with millions of stolen Euros [fake]. We are led to believe that the group’s wealthy philanthropist “benefactor” Arthur Tressler is the puppet-master pulling the gang’s strings.

Enter insecure FBI agent Dylan Rhodes (Mark Ruffalo) to investigate the group’s bank robbery — which didn’t actually occur, so why is the FBI investigating anything? Also, enter Interpol hottie Alma Dray (Melanie Laurent) to team up with Agent Rhodes in investigating exactly what? 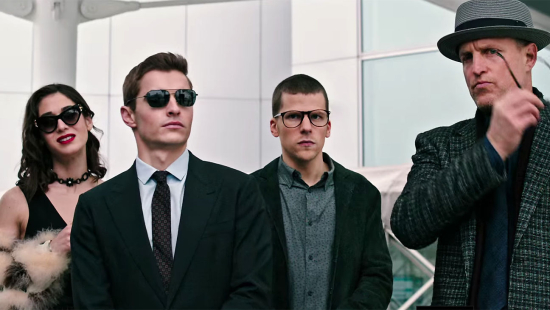 Morgan Freeman plays Thaddeus Bradley, an author specializing in exposing magicians’ secrets. Thaddeus has been videotaping the Horsemen’s act, and as such is qualified to assist in the investigation. The highlight of the movie arrives during a terse meeting between Thaddeus and Michael Caine’s character, as staged in New Orleans magic shop. 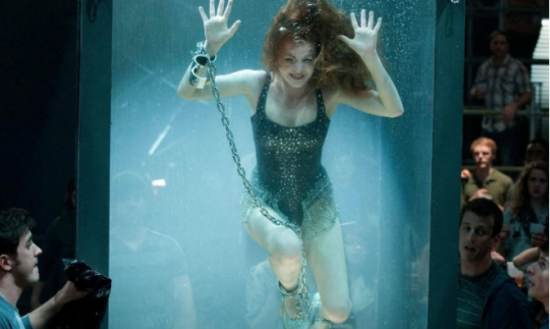 The story chases its tail regarding a warehouse safe loaded with cash that the Horsemen plan to rob. By the time the film gets around to its big revelation regarding the identity of the person responsible for the unsubstantiated shenanigans that have transpired, there is no character or motivation for the audience to side with. Most annoying is Jesse Eisenberg’s persona as a “dick” magician whose demise could have at least provided some sense of satisfaction to a movie that entertains as much as its thematic premise provides. The closer you look, the less there is to see.

Posted by Cole Smithey at 03:29:23 PM in Action/Adventure