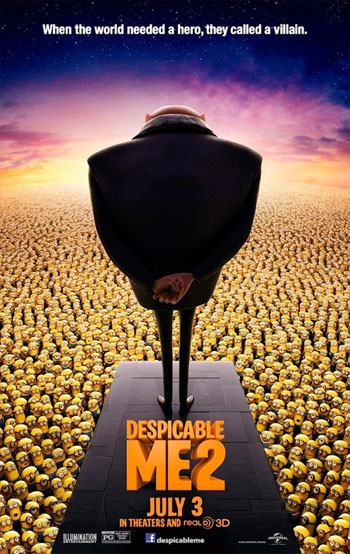 Co-directors Pierre Coffin and Chris Renaud return for a shot at turning the unlikely “Despicable Me” premise into an animation franchise. As sequels go, “Despicable Me 2” improves by a few degrees on Coffin’s and Renaud’s disastrous original 2010 installment with its creepy mixed messages involving a Russian adult supervillain named Gru (voiced by Steve Carell) with three adopted daughters, and a factory full of little yellow steampunk “minions.” You might imagine that Vladimir Putin commissioned the franchise himself.

These days, the reformed Gru seems focused on making a happy childhood for his adopted girls Agnes (Elsie Kate Fisher), Margo (Miranda Cosgrove), and Edith (Dana Galer). The bald mastermind has turned his once wicked underground factory — as overseen by the Russell Brand-voiced Dr. Nefario — into a jelly-and-jam production facility. Sadly, the variously colored goopy preserves are so awful that not even Gru’s minions can stand the taste.

A visit from one pointy-nosed Anti-Villain-League agent Lucy Wilde (voiced by Kristen Wiig) finds Gru momentarily kidnapped in the passenger seat of a tiny car that transforms into a submarine. Agent Lucy delivers Gru to the agency’s leader Silas Ramsbottom (voiced by Steve Coogan), who requests Gru’s assistance in discovering the identity of a villain who has stolen a top-secret transmutation serum from a military facility in the Artic Circle with the use of a gigantic electromagnet. Sparks of the romantic variety spit and sputter between Gru and Lucy — much to the delight of Agnes, but to the anxiety of the painfully shy Gru.

Evidence regarding the stolen serum points to a bygone supervillain known as El Macho (voiced by Benjamin Bratt), who famously rode a shark into the mouth of an active volcano with 250-pounds of dynamite strapped around his chest. How saving people from an erupting volcano — à la Mr. Spock in the recent “Star Trek” installment — counts as a “villainous” act, sits as a burning question for audiences to mull over. Coincidentally, a man who looks exactly like El Macho, but calls himself Eduardo, runs a Mexican restaurant in a Los Angeles mall where Gru is convinced the serum is hidden.

Computer-animated slapstick comic sequences involving the minions sit opposite sequences matching the kind of explosive spectacle you’d find in a Michael Bay movie — think “Transformers.” Returning screenwriters Ken Daurio and Cinco Paul guild the lily with rambling comic asides involving the gibberish-speaking minions that, it is foreshadowed, are due for their own spinoff franchise of movies — stay after the credits to see the 3D-heavy preview.

“Despicable Me 2” has a knock-off quality that brings up allusions to espionage related television shows of the ‘60s and ‘70s like “The Avengers” or “Get Smart.” The comparison does not favor the "Despicable" franchise. While the arcane steampunk minions deliver a few chuckles here and there, the dumbed-down subplot comes across as a cheap device intended to pander to the film’s youngest audience members who appreciate things like fart jokes and mumbling conversation.

Listed below are links to weblogs that reference DESPICABLE ME 2: