Western Allegory Pop
How the West Was One 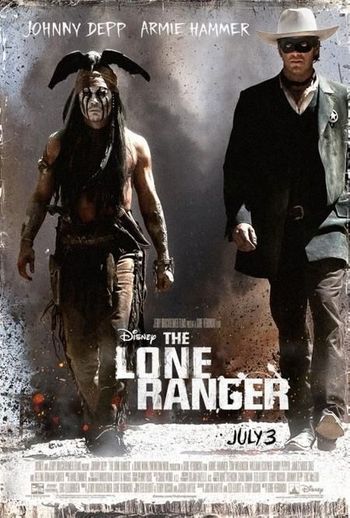 Perhaps more important than what Gore Verbinski’s gleefully postmodern Western isn’t, is what it is. Written by two screenwriters from the “Pirates of the Caribbean” franchise, along with Justin Haythe (“Revolutionary Road”), this deconstructionist movie plays freely with several layers of historic social and political subtexts surrounding the U.S. government's decimation of Native Americans — a tall politico-cultural order for a Hollywood summer “tentpole” product.

Audiences expecting a standard-issue bloated Hollywood comic-book action movie favoring style over substance will be sorely disappointed. Which isn’t to say that “The Lone Ranger” doesn’t offer its share of rapid-fire chase sequences or gritty brutality; it does, and these sequences matter in direct relation to the form and substance of the narrative. Still, nuanced degrees of allegory make this movie sing like an endangered golden-cheeked warbler for an audience tuned in to its upper reaches of narrative harmonic pitch. Bent notes of side-glanced historic political examination invite the audience to contemplate an anti-imperialistic dialectic delivered with tongue-in-cheek humor and a cool regard for supernatural aspects of Indian culture. Though necessarily rooted in the ‘30s era radio program and the ‘50s era television series, this Lone Ranger is far removed from its original template. 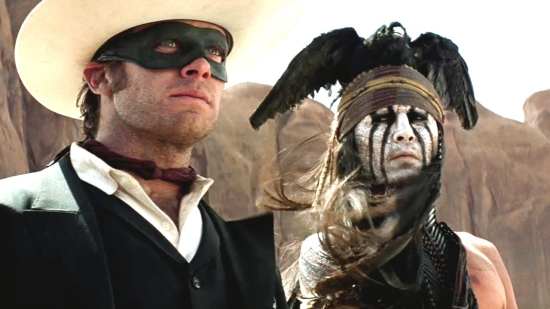 One look at Johnny Depp’s Kirby Sattler “I Am Crow” painting-inspired rendering of a painted-face Comanche Indian mystic tells you everything you need to know about Tonto’s depth of backstory. This is one heavy cat.

Flashes of surrealistic visions hang like suspended grace note trails of freshly performed peyote rituals, permeating the hot noonday air of Utah’s iconic Monument Valley, where Westerns of the ‘30s, ‘40s and ‘50s were filmed — e.g., John Ford’s “The Searchers” (1956). The effect is as haunting as the most forceful cinematic political satires – reference Billy Wilder’s “Ace in the Hole” or Paul Verhoeven’s “Starship Troopers” as examples.

We catch up with the elderly Tonto in 1933 during the Depression. The deeply wrinkled Native American “works” in a San Francisco circus sideshow where he stands mannequin-still in an Old West diorama — ironically entitled “The Noble Savage.” The label speaks volumes. Tonto has been turned into a literal “wooden Indian” by a society created by the greedy robber barons that stole his people’s land after using every trick in the book — and of course mass murder. The aged roughrider has been patiently waiting for just the right young boy to come along to indoctrinate into his personal story as a freedom fighter against a colonialist system that killed off more Native Americans than Jews systematically killed by Hitler. 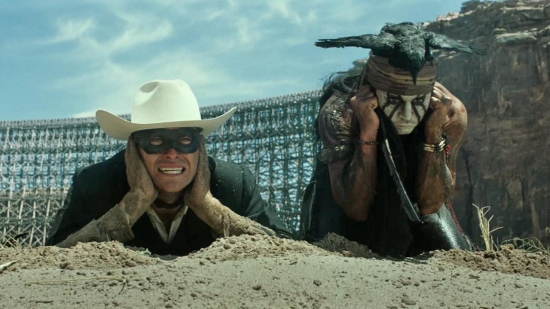 A quaint narrative-framing device transports us back to Colby, Texas circa 1869. While the Civil War was raging far away in the East, a different kind of war was being fought in the West. Manifest destiny has a brand: “Unification of the country will come by iron rail,” a smarmy local politician named Latham Cole (Tom Wilkinson) tells a crowd of onlookers. Laying down miles of railroad tracks to transport freshly mined silver is all that anyone in a position of power around these parts cares about — well nearly everyone.

Arnie Hammer’s Ivy League attorney John Reid is an adult Boy Scout looking to follow in his sheriff brother Dan’s footsteps. The milquetoast John Reid exhibits none of the rough-hewn traits of your standard Western hero. He isn’t stoic like a John Wayne or a Clint Eastwood. In fact, he has a tendency to whine. He isn’t particularly brave, and his lack of loyalty to the Indian that saves his life is less than impressive — to say the least. He doesn’t like guns because he’s a pacifist. Nonetheless, his ethics aren’t as responsible as he pretends. It doesn’t take Reid long to forget he owes his life to Tonto. He attempts to abandon Tonto — buried up to his head — before realizing that he still requires Tonto’s assistance. The scene is important because it shows how the “well-meaning” white man is still merely an exploiter of more honest culture.

Villain-of-the-day Butch Cavendish (William Fichtner) rides in a boxcar shackled to Tonto on their way to an execution masquerading as a trial. Butch has plenty of outlaw underlings looking to rescue their cruel hare-lipped leader. Between Butch and Latham Cole, Tonto and the Lone Ranger have plenty of reason to get up in the morning.

In Jim Jarmusch’s great 1995 post-modern Western “Dead Man” Johnny Depp plays a straight-arrow accountant named William Blake escorted by a graceful American Indian named “Nobody” in order to assist with Blake’s voyage to the spirit world — i.e., death. In “The Lone Ranger,” Depp has transmogrified into a “spirit-walker” sage who guides a white man on a transcendent journey toward an outlaw existence. “Nature is [indeed] out of balance.” It is Tonto’s revenge-driven mission to put some weight back on his people’s side of the scales. That he does so with more wit, humanity, physical grace, and presence of mind than anyone else in the story is to be expected.

With its imminent failure at the box office “The Lone Ranger” might be the movie that redefines the Hollywood business model. “A man can’t choose his brother. His brother chooses him.”