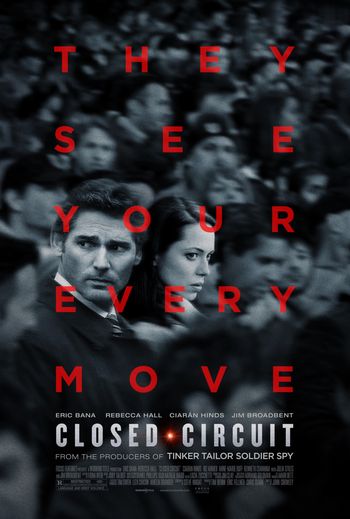 Gaping plot holes don’t prevent this nearly current espionage thriller from grabbing its audience and keeping them hooked all the way to its socially volatile ending. As the title hints, England’s CCTV (Closed Circuit Television) method of public [and private] surveillance comes into play during a case involving the terrorist bombing of Burough Market in central London. The trial of a foreign suspect plays out in a secret London court where romantically-linked defense attorneys (played by Eric Bana and Rebecca Hall) struggle to find the truth beneath a thick stack of government-propagated deceptions.

Audiences familiar with the NSA scandal regarding America’s secret FISA court-approved surveillance of every aspect of foreign and domestic communication will be ahead of the film’s curve. Still, it is no less comforting to recognize that the UK is just as much of a police state as the US.

The movie has a lot going for it, not the least of which is Eric Bana’s ever-reliable presence — this time as Martin Rose, a defense attorney called upon to defend the bombing’s accused mastermind Farroukh Erdogan (Denis Moschitto) after the “suicide” of the original defense advocate. Bana’s terse masculinity serves the part well. You always have the sense that Bana’s self-possessed character is the kind of man who doesn’t need to carry a gun to defend himself.

Similar to America’s bogus justice system for accused terrorists, the British courts deem the evidence so “sensitive” that the imprisoned defendant is not allowed to know the details of the charges being brought against him. Supposedly unaware of Martin’s romantic past, the court appoints Claudia Simmons-Howe (Hall) to the defense team. Although one of the attorneys should in good conscience recuse himself or herself, Martin and Claudia have too much ambition to let such an opportunity for media exposure pass unexploited. They are willing to risk their careers — all or nothing. Never mind that once either of them receives the evidence, it becomes illegal for them to communicate in any way. This is where the story’s biggest plot hole opens up. Although the screenwriters do their best to fill in the gap for the court’s motivation behind such a problematic pairing, the predominant surveillance element of the plot gets in the way.

Director John Crowley (“Boy A”) keeps the tense dramatic movement tight through quick plot reversals that slingshot the story toward a logical, or illogical conclusion — depending on your perspective. Although the film’s action sequences are limited, punches of gritty encounters strike with lightening bolt efficiency. Crowley’s use of surveillance camera footage heightens the drama, although the director doesn’t utilize the effect with sufficient purpose to serve the storyline.

As with other surveillance-themed movies made recently, screenwriter Steven Knight (“Dirty Pretty Things”) lacked knowledge of the Edward Snowden disclosures that have alerted the world to a depth of US and UK government corruption — some of which is on display here.

As it stands, “Closed Circuit” is a well-executed sketch of an unethical government and judicial system exploiting the public's fear of the unknown in order to manipulate the same terrorist acts it pretends to defend against. You get the sense that the number of surveillance-related espionage is about to get a lot deeper over the course of the next few years.

Listed below are links to weblogs that reference CLOSED CIRCUIT: