I GIVE IT A YEAR 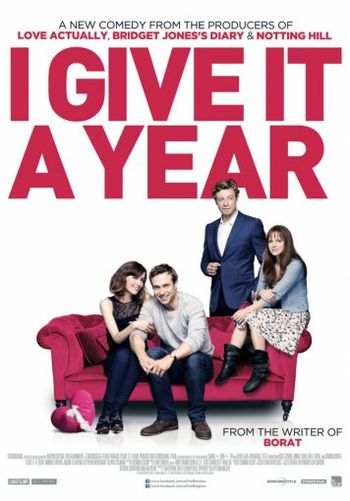 As a premise, a doomed marriage sounds like a no-brainer: you can pile on outrageous episodes of slapstick, physical comedy and biting wit. Unfortunately, "I Give It a Year" is a no-brainer. The film goes all but cold after its otherwise promising opening wedding sequence blows out its last candle. Blame the writing, directing, and casting – courtesy of first-time director Dan Mazer (screenwriter on Sacha Baron Cohen’s laugh-fests “Borat” and “Bruno”). Mazer might have done better to include Baron Cohen in his directorial debut. The thought of Sacha Baron Cohen filling the shoes of the would-be home-wrecker played by pretty-boy Simon Baker screams “comic improvement.” “I Give It a Year” wants to be a modern screwball comedy. Unfortunately, it doesn’t possess any of the requisite madness to set zingers flying.

Most adults have experienced the uncomfortable feeling of watching friends and family members tie the knot where the couple's compatibility level ranks on the negative end of the scale. Sometimes concerned individuals go so far as to perform the thankless task of advising said doomed bride or groom against taking the first step down the aisle with their soon-to-be spouse. The groom’s best-man Danny (irreverently played by Stephen Merchant) attempts such a belated intervention during his no-holds-barred riffing on the groom’s desultory past of romantic indiscretions during the wedding dinner speeches. Alas, the movie peaks early during Danny’s salty talk. It never again approaches such comic heights.
See, for example — or better yet, don't — the unhappy union of London novelist Josh (Rafe Spall) to advertising heavyweight Nat (Rose Byrne). With his first and only novel a success, Josh suffers from writer’s block while his new bride is busy shifting gears into the upper echelon of the international corporate world. Disaster is written all over the place. Nat is already bored with her new husband. Josh needs a more supportive companion. Couples’ therapy sessions with a hypocritical therapist offer little assistance for two people who couldn’t get through a game of checkers. Mazer manages to squander the obvious therapy trope for any of its easy-money comic potential.

Neither Nat nor Josh are appealing characters. Rose Byrne’s Nat is pretty in a predictable way. Her emotional depth resides somewhere in the coif of her hair. Josh is a wishy-washy hipster with the social acumen of a feral cat. He’s too much of a slacker to make an impact. In short, Nat and Josh are generic cinematic creatures. So it’s interesting whenever the focus shifts to the unpredictable Danny, or to Josh’s still-attracted ex-girlfriend Chloe (Anna Faris) – a spitfire humanist who is right down Danny’s oblivious alley. That leaves Simon Baker to thoroughly make a mess of his sub-plot. The appropriately named “Guy” is a romantically inclined American shark on the make in London. Guy is an on-the-nose moniker for a male stereotype that tries too hard to impress whatever woman he sets his sights on. He’s a collector who will roll out the red carpet and set loose white doves during an inappropriate “impromptu” romantic dinner to win over his target. In spite of his Gatsby-like good looks, Guy doesn’t really believe in himself because he’s a phony without a bone of sincerity in his body.

Watching Nat and Josh get what they deserve is akin to eating one of those Swanson “TV dinners” that was popular with latchkey kids back in the ‘70s, when American culture could be charted by its obsessive jumps from one fad [say, tube-tops] to the next [remember yo-yos]. You'd suffer through the flavorless Salisbury steak knowing that you’d finish with the sickly sweet apple-pie – filled with enough preservatives to keep your corpse from decomposing for a week.

Dan Mazer has said that he wanted to make a “com-rom” rather than a “rom-com” – whatever that means. His murky intentions are certainly evident in a formulaic movie that never finds its footing, much less hits any stride.

Listed below are links to weblogs that reference I GIVE IT A YEAR: