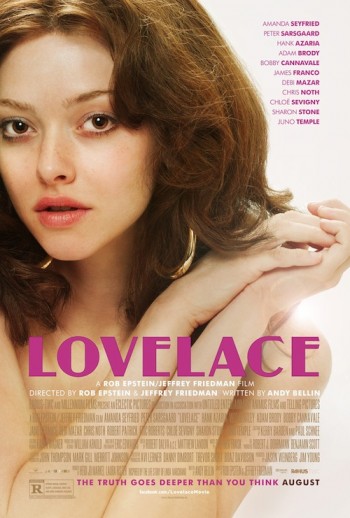 Amanda Seyfried (“Mamma Mia!”) cuts her teeth on a weighty role that gives her ample room to fill her range as an actress. Seyfried conveys her flawed character’s quicksilver transition from naif to world-weary victim with an ideal balance of homely promise and make-up-endowed beauty.

Watergate-era 1972 finds 19-year-old Linda in the backyard of her conservative parents’ house working on her tan with her best friend – much to the disgust of her strict mom (played by an unrecognizable Sharon Stone). Linda’s roller-rink hot-pants exhibition attracts Chuck Traynor (Peter Sarsgaard), a master manipulator of young women. Traynor’s hippie disguise and stoner slang charms Linda into a relationship built more on a pimp/prostitute template than on any evaporating illusion of romantic love.

Sarsgaard’s smallish stature and slow-burn temper don’t measure up to demands of the roll. He’s too comfortable. When he loses his temper with Linda, there isn’t enough ferocity. Sarsgaard is too puckish. Although we never see it, Chuck supposedly runs a stripper bar. Whether or not he has a steady job is beside the point; Chuck is a smooth-talker with a wad of cash and a hot sports car – a con man on the make. When they’re alone, Chuck and Linda play out Chuck’s sex fantasies. Linda needs training in the oral-sex department, and proves to be an enthusiastic student of the art — although no pornographic proof is offered.

While “Lovelace” hints at the cataclysmic cultural phenomenon that “Deep Throat” created in America, the story rests on Linda’s increasingly abusive relationship with the hot-tempered Chuck Traynor, whose “manager” credentials do little to insure even a small percentage of the veritable Niagara of cash that “Deep Throat” generated. For a film about the first super-porn-star, “Lovelace” is remarkably shy about its representational sex scenes. It is a profound mistake. Duo-directors Rob Epstein and Jeffrey Friedman dodge using clips from the actual film – perhaps due to licensing issues. The brief reenactments on display do little to disclose what it was about “Deep Throat” that opened the floodgates for the porn industry during an era of hedonistic sexual liberation, insurgent feminism, and trenchant political corruption – which arrived ironically and not-so-coincidentally via an anonymous whistleblower known as “Deep Throat.”

Linda Boreman’s story is an American Mafia story as much as it is a personal tragedy for a woman who was barely able to escape the clutches of a small-time pimp who got lucky, if not rich, on her back.

Listed below are links to weblogs that reference LOVELACE: