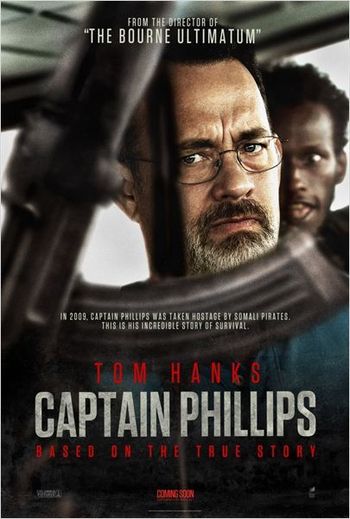 The grueling 2009 kidnapping suffered by U.S. cargo-ship captain Richard Phillips comes to tangible life in Paul Greengrass’s nonstop nail-biter. Nerves will be rattled. Regardless of the audience’s political opinions regarding the underlying justifications of the Somali pirates (fishermen who overtake ships carrying millions of dollars worth of goods after illicit dumping of toxic waste along the Somali coast by Western corporations destroyed the fishing industry), “Captain Phillips” provides a clear viewpoint on human despair and the outlandish lengths to which the U.S. military goes in order to rescue just one man.

Tom Hanks returns to form with a vengeance, after a string of less than impressive outings. “Larry Crowne” or “Cloud Atlas,” this is not. Hanks lets his highly-skilled character’s Boston accent lead him as captain Phillips, a family man living in Underhill, Vermont, who takes his job seriously — very seriously. A car-ride conversation with his wife (Catherine Keener) makes an impact. The subtle expository scene binds us to Hanks’s meticulous protagonist with an empathy born of familial dedication and humility. Every time Rich Phillips ships out, he and his wife know that he may not return. He takes nothing for granted.

Not one to waste a second of possible preparation time, Phillips calls for a lockdown drill when his ship, the Maersk Alabama, enters dangerous waters near the Horn of Africa. Coincidentally, his loyal crew’s attention to their protective measures comes just prior to two “skiffs” containing Somali pirates approaching the giant cargo-laden vessel. From the relative safety of the bridge, Phillips gives orders to speed the ship and make five-degree corrections. This is “real-life” — not a drill. Some ingenious walkie-talkie fakery helps lessen the encroaching danger. Despite their size, the shipload of unarmed crewmen remains shockingly vulnerable to a handful of crazed gunmen with dollar signs in their eyes.

We get a procedural crash-course in defensive nautical maneuvers as the Alabama crew turns on hoses aimed downward off the sides of the ship. The hoses’ spewing water promises to sink a skiff as it gets near enough to the side for the pirates to extend a ladder they’ve brought to board the vessel. As fate has it, one of the hoses points upward, providing a chink in the Alabama’s ambiguous armor. Within minutes, the armed pirates infiltrate. Many shots are fired. The Alabama’s unarmed crew of roughly 24 men hide, huddled together in the ship’s boiling hot engine room. Captain Phillips and his fellow commanders stay on the exposed bridge.

With the outstanding assistance of cinematographer Barry Ackroyd (“The Wind that Shakes the Barley”), Paul Greengrass provides a micro/macro visual context for everything. Complex aerial shots give a sense of the impracticality of the pirates’ mission. Here is a David and Goliath struggle that soon puts David — as represented by Somali pirate Muse (well played by Barkhad Abdi) face-to-face with a man he perceives as a living embodiment of the Western avarice that has ruined his community’s livelihood. Muse is more than ready to match wits with his perceived enemy regardless of the outcome. The ever-tightening connection between the usurping captain Muse and the more intellectually equipped Captain Phillips becomes a primary narrative focus — even more so than the obvious rescue story at hand.

The film’s weakest link lies in composer Henry Jackman’s over-stated musical accompaniment. Pulsing radar beeps and low rumbling heart-beat-timed bass tones push the film’s score into a cartoonish soundscape. For such an inherently suspenseful atmosphere as a hijacked giant ship on the high seas, Jackman’s music slathers on sound where natural source-sounds would have been far more suggestive. Nonetheless, “Captain Phillips” is a gut-wrenching tale of real-life survival that will leave you wiped out.

Listed below are links to weblogs that reference CAPTAIN PHILLIPS — NYFF 51: