« BLUE IS THE WARMEST COLOR — THE CRITERION COLLECTION | Main | RUSH »

Shocks, and Surprises and Scares
High-Tension Mystery is a Doozy 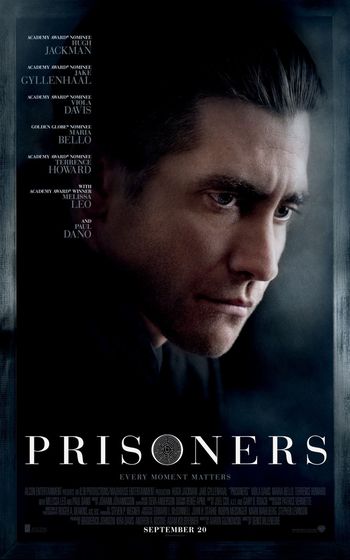 While it lacks the oomph of a concrete true-crime drama like “Zodiac,” Denis Villeneuve’s taut innovative suspense-thriller keeps you guessing. Lauded for his deserving 2011 Oscar-nominated drama “Incendies,” Villeneuve keeps the narrative puzzle moving with a clinical precision, supported by Roger Deakins’s understated cinematography. The unnerving suspense that screenwriter Aaron Guzikowski (“Contraband”) develops, shifts between characters on multiple sides of a kidnapping mystery regarding two little girls. Vigilante justice plays a key role in the film’s dark underbelly of interconnected crime.

Every parent’s worst nightmare comes to fruition on a cloudy Thanksgiving Day in suburban Pennsylvania where one God-fearing family visits another within walking distance of their traditional middle-class home. Keller Dover (Hugh Jackman) and his wife Grace (Maria Bello) take their kids, 15-year-old Ralph and eight-year-old Anna, to cook dinner at the home of Franklin (Terrence Howard) and Nancy Birch (Viola Davis). Anna plays with the Birch’s similarly aged daughter Joy. As the afternoon wears on, the parents realize that the girls are missing. The unseen driver of an RV that was parked in front of a nearby vacant house presents the most obvious suspect. Evidence of America’s failing economy is all around.

Keller discloses his survivalist mentality in an opening sequence where he coaches his son Ralph (Dylan Minnette) about “praying for the best but being prepared for the worst,” after Ralph shoots and kills his first deer. The patriarch’s cynicism resonates right up to the film’s closing shot. He’s not wrong, though ethically he’s on thin ice. Though not an obvious stretch for Hugh Jackman — a do-it-all-actor whose brawny presence more than fills the screen — his performance here as a man who loses all sense of propriety in order to locate his missing daughter, arrives with an authority of passion that galvanizes the film’s unsettling themes — the uselessness of torture being one.

Jake Gyllenhaal leads the story’s police-procedural element as Detective Loki, a personally committed detective whose constant state of sleep-deprivation causes him to forcefully blink his eyes. The scenes where Gyllenhaal and Jackman play off one another burn with a white-hot fury. If the audience is in tune with what two of the finest actors in cinema are doing, they realize that this is as good as it gets.

The determined detective captures the RV’s sketchy driver Alex (creepily played by Paul Dano), a mentally indigent man-child with the IQ of a 10-year-old. Without enough evidence to detain Alex more than a couple of days, the police chief releases the case’s primary suspect to the care of his white-trash aunt Holly (Melissa Leo). A police parking lot scuffle between Keller and Alex provides the distressed father with all the proof he needs to be convinced to Alex’s guilt. Taking matters into his own hands, Keller becomes a kidnapper in his own right.

“Prisoners” demonstrates an uncomfortable connection between criminals and their victims, whose lives take on dark aspects of their suf fering. There’s nothing morally comfortable. Good and evil don’t exist, only a cold gray indifference that might land heads-up with a nudge from someone like Loki, who cares too much for his own good. Caring is a good thing, so long as you keep a safe distance.

Listed below are links to weblogs that reference PRISONERS: