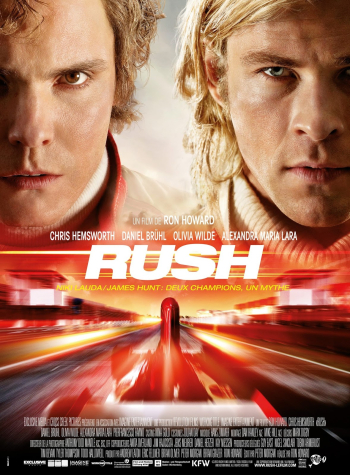 Ron Howard’s fast-paced portrait of one of Formula One’s fiercest rivalries is a hyper-compartmentalized affair. Everything in Peter Morgan’s too-tightly-knit script occurs as one more bubble of narrative information equal to the last. The result is a moderately pleasing movie whose arc swerves more than it climbs and peaks. Only rarely does the story breathe. Morgan — the screenwriter on such winners as “The Queen” and “Frost/Nixon” — never allows a single race to fully represent the battle of wits and jealousy between the rivals.

‘70s era race car drivers James Hunt and Niki Lauda present the kind of oil and water dichotomy that screenwriters fantasize about. Daniel Brühl (“Inglourious Basterds”) plays rich-kid-engineering-genius-turned-racer with a steely tenacity that all but eradicates Chris Hemsworth’s casual performance as the oversexed playboy racer James Hunt. Where Brühl’s performance bounces directly on top of every beat, Hemsworth plays his character out of time. The effect only works intermittently between flurries of Grand Prix racing sequences in different cities that are kept too brief for the audience to invest enough in their outcomes — which gratuitously appear in bold graphics across the screen, giving the movie a cartoonish quality. 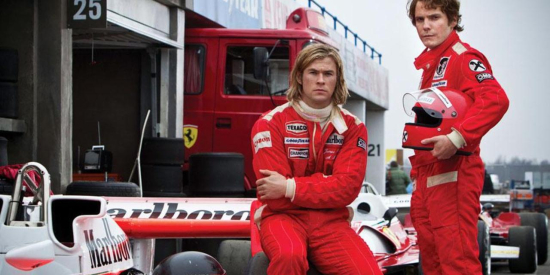 Still, the movie has fleeting moments that connect. A scene where the woman (Alesandra Maria Lara) who will become Niki Lauda’s wife eggs him on to show off his driving skills in a borrowed car, makes an elegant segue to Lauda in mid-race at a Grand Prix. Another scene, in which James Hunt lies on his back holding a steering wheel while visualizing his upcoming race in Monaco, provides an exacting view inside the mindset of a Formula One racer.

Such moments elevate “Rush” out of repetitiveness. Clever camerawork using small cameras attached to the race cars give glimpses of what it feels like to drive Formula One cars through S-curves at 170 miles per hour. If only the filmmakers had done more to connect the guts of the race sequences with the inner monologues of its dueling drivers, “Rush” might have been more than the passably entertaining ride that it is.