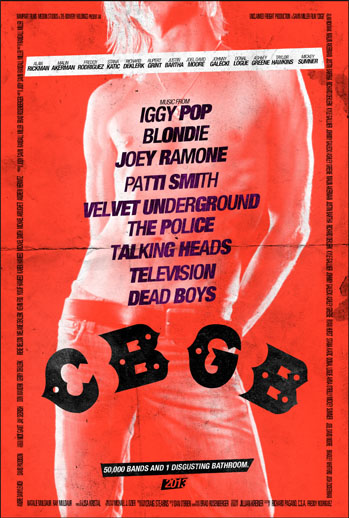 You have to hand it to director/co-writer Randall Miller for trying to take on the hornets' nest of the punk rock movement: CBGB’s, the grungy Lower East Side bar that gave punk a home base before anyone had an inkling of what punk rock was. Alas, trying isn’t good enough.

As with most things filmic, the problems are rooted in the script. Miller and his recurring script collaborator Jody Savin (Marilyn Hotchkiss’ Ballroom Dancing & Charm School”) create a comic pastiche centered on Hilly Kristal, the visionary proprietor who opened up his Bowery dive bar to bands such as Television, Blondie, Talking Heads, and the Ramones. Unfortunately, the film dips its toe into biopic territory too much for the ostensibly furious purpose it seeks to achieve — namely, representing a crash-course on some East Coast bands that set the world on fire.
Casting is a hurdle that no living filmmaker could solve. Here is a movie that should have been made in the 1980s so that the actual musicians could have played themselves. Watching Foo Fighters drummer Taylor Hawkins try to channel Iggy Pop is like watching a dog play a cat; it just doesn’t work. Likewise, a scene involving said singer being sexually propositioned by the Ramones’ manager hits the screen with a thud.

Doomed from its inception, “CBGB” leaves a bad taste in the viewer’s mouth for reasons obvious and clandestine. If you have even a passing knowledge of the bands on display — not the least of which is the Dead Boys — you’ll sink in your seat while you watch some half-assed copycat try to pass himself off as Stiv Bators. We are talking about Stiv—freaking—Bators—one of the most charismatic rock stars of all time, who was possessed of a prodigious ability to phrase teen angst in a hugely charismatic voice. Needless to say, Justin Bartha’s performance as Stiv Bators is an anemic thing lacking in the humor, sarcasm, and panache of its original creator.

To its credit the move captures a few glimpses of the magic that punk stars like Patti Smith conjured — if only for brief moments — on a crappy stage in a crappy bar covered with its owner’s dog’s prodigious crap.

If you’re a punk veteran then you’re — at youngest — on the dark side of your 40s. Nonetheless, you will be drawn to see “CBGB” for yourself. You will be disappointed, but you will also be reminded of a magical time when music meant something, and the bands that played poured every bit of their souls into every note. Sad to say, that’s as good as it gets for punk fans who actually saw punk bands like The Cramps or Johnny Thunders and the Heartbreakers. It's also as good as it’s ever going to get for this kind of movie.

Listed below are links to weblogs that reference CBGB: