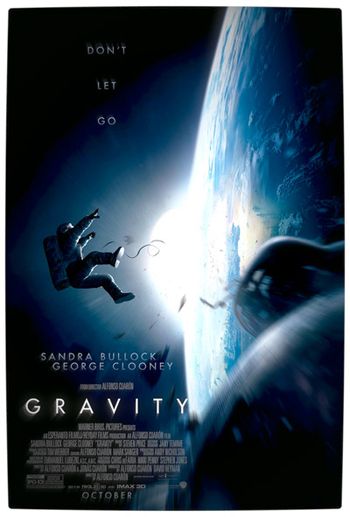 Just as Stanley Kubrick’s “2001: A Space Odyssey” (1968) broke open the possibilities for depicting outer space in science fiction filmmaking, Alfonso Cuarón’s “Gravity” makes visible a deep space reality that has never before been witnessed by filmgoers. That Cuarón uses stunning state-of-the-art technology in the service of an immaculately concise survival narrative — co-written by Cuarón and his brother Jonás — adds to the film’s power. “Gravity” leaves the viewer with indelible memories that traverse between fantasy and nightmare flashbacks like an energy pattern between positive and negative polarities.

At its heart “Gravity” is a two-man play that shifts into a solo act of survival that is as much defined by personal obstacles as by harsh external forces at play in the thermosphere — 375 miles above the Earth’s surface. There’s an understated feminist element inherent in the film’s theme of last-ditch survival.

Part of the film’s beauty lies in its intuitive casting. George Clooney and Sandra Bullock are movie-star names that sound as though they belong in a romantic comedy more so than in the context of a science-fiction misadventure. Anyone who has ever underestimated Sandra Bullock’s dramatic acting skills will be taken aback. Her nuanced performance compliments Cuarón’s technical virtuosity note for note. The story is deceptively simple. Dr. Ryan Stone (Bullock) is on her first outer space mission, to make repairs to the Hubble telescope. By her side is veteran astronaut Matt Kowalski (Clooney), who counts the mission as his last.

Kowalski has made the voyage into Earth’s orbit so many times that he passes the time spent floating outside of the NASA spacecraft by carrying on a constant conversation with Mission Control, whose AM radio plays in the background. The laidback pilot jokes about breaking the record for the longest spacewalk on his last visit to the stars. Clooney’s gregarious character tells the same old stories of his oat-sewing youth to the familiar voice at the other end of the line, while staying attentive to the task at hand. Kowalski jokes that he has “a bad feeling about the mission” as a way of warding off anything that might jinx it.

Dr. Stone fumbles with repairing a circuit board on the Hubble. News of fast-approaching debris from a self-destructed Russian satellite sends the astronauts scrambling. But no amount of determination can get them out of danger’s path in time. A cloud of debris assaults the astronauts like a swarm of giant metal locusts. Cuarón’s microscopic attention to every detail boggles the mind. The audience is immersed in an alien reality where every physical object has immense importance. Kowalski calmly gives Stone instructions from his helmet headset. All communication with Mission Control is lost. Dr. Stone becomes untethered, floating in a death-spiral toward a dark abyss. Cuarón’s floating camera (operated by cinematographer Emmanuel Lubezki) glides and follows. More shrapnel approaches at blinding speed, flying into the audience’s eyes thanks to an effective use of 3D that makes the action on-screen all the more terrifying.

A dream sequence born of Dr. Stone’s cold-sweat panic opens the story up to yet another realm of surprise. Bullock’s quick-thinking character taps every resource available in her active struggle to beat the odds against her — against us. “Gravity” shares another component with “2001: A Space Odyssey” in that it sticks deep inside the viewer’s subconscious, where it lurks waiting to expand at the most unexpected moment. It is the closest many will come to ever experiencing space on a terrifyingly lonely level. Which is probably a good thing.

Listed below are links to weblogs that reference GRAVITY: