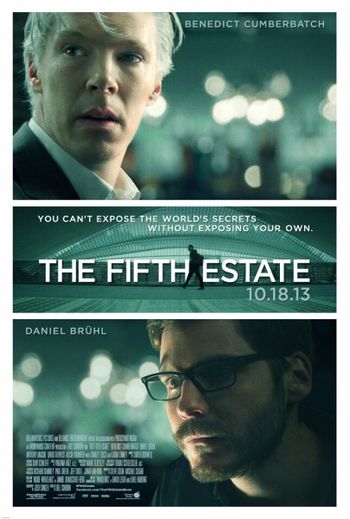 Pre-panned — after reading the script  — by WikiLeaks founder Julian Assange, “The Fifth Estate” is a visually stunning introduction to the origins of a news organization that revolutionized journalism. As much as the film’s dramatic liberties play with the real life nitty-gritty aspects of its elusive subject, it will provide food for discussion for years to come.

Juicy tidbits abound. Julian Assange dyes his famously white hair white. In the early days of WikiLeaks, Assange ran the organization practically by himself while pretending he had “hundreds” of volunteer hackers helping him. Whether accurate or not, this is sexy stuff. Director Bill Condon (“Kinsey”) knows exactly how to place dramatic emphasis on the context of such details surrounding the globetrotting days of the now-exiled publisher of classified documents — namely those brought to light by Bradley Manning in 2010.

Based on two books [“Inside WikiLeaks: My Time with Julian Assange at the World’s Most Dangerous Website” and “WikiLeaks: Inside Julian Assange’s War on Secrecy”] that Assange decries as “discredited,” the movie plays like a spy thriller on steroids. With its quick-cutting of headline topics and splashy shots of foreign locales, the opening credit sequence is enough to make politically savvy audiences salivate. Condon’s evocative use of impressionistic imagery — such as a “Brazil”-inspired vision of rows of endless office desks adds to the film’s dynamic sense of bureaucracies collapsing via their own greed-fueled mechanisms of economic skullduggery. The film calls attention to its purpose by framing Julian Assange as an “antisocial megalomaniac” — something Benedict Cumberbatch worried about in an interview with “Vogue” magazine. The fact that the story is witnessed through the eyes of WikiLeaks volunteer Daniel Domscheit-Berg (wonderfully played by Daniel Brühl), a person who was “not significantly involved” with WikiLeaks after 2009, points to an inherent fictionalization of events, possibly at the behest of corporate interests. “The Fifth Estate” is a Disney [Dreamworks] production.

It is telling that Daniel Domscheit-Berg profited significantly from the sale of the film rights based on a book he contributed to via ghostwriter Tina Klopp. The film falsely states that Assange has been “charged with rape” in Sweden. Assange would not have been granted political asylum if that were the case. Most confusing is a repeated bit of obfuscating subtext that claims that Julian Assange and his family were members of a cult when he was a child — something he has staunchly denied.

Here is a very entertaining Hollywood movie packed with propaganda attempts to tarnish Julian Assange in an inherently personal way. Like the majority of bogus or slanted information disseminated by the American media, “The Fifth Estate” leans more on fiction than on fact. However, that’s not to say audiences won’t get their money’s worth from it. Benedict Cumberbatch delivers an Oscar-worthy performance, as does the always-intriguing Daniel Brühl. You owe it to yourself to see the movie if only to see what a Hollywood hatchet job looks like. It’s pretty, seductive, and very effective if you aren’t comfortably predisposed to reading between the lines.