Writer-director Ken Scott does the same thing twice by repurposing his 2011 French-language film “Starbuck” into a Hollywood movie that predictably loses something in translation. Pumping up the volume on the comic account of a sperm-bank donor who finds out he has sired more than a few children — under the name Starbuck — 20 years ago isn’t exactly a recipe for success, especially if the main entertainment quotient has only one thing going for it: Vince Vaughn.

While the ageless man-boy is perfectly adequate in an ensemble buddy movie such as “Wedding Crashers” or a silly sports comedy such as “DodgeBall,” Vince Vaughn doesn’t have the dynamic comic pizazz to pull off the high-wire feat of leading a comedy without heavy-duty support from other comic actors. Chris Pratt is hardly prepared for such heavy rib-tickling lifting in his supporting role as David’s attorney pal Brett. Jason Segel would have been a better casting choice. Segel would have been a better choice for Vaughn’s role for that matter.

Everything about “Delivery Man” feels, well, labored. Every joke ends on a flat note. David Wozniak (Vaughn) drives a truck for his family-owned meat-delivery company — hence the film’s title. He’s a reliably unreliable character whose good intentions are constantly getting quashed due to his lack of focus. The basketball team uniforms he promises to bring to a photo shoot for his co-workers, go missing after he leaves them in a delivery truck that gets towed away. 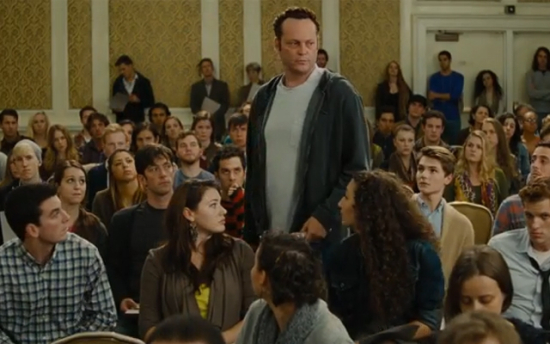 His policewoman girlfriend Emma is tired of his BS, yet plans on having their unplanned baby in the knowledge that she will have to bear the burden of the parenting duties when the time comes. David has some double-time personality tweaks to make.

The plot shifts out of first gear when an attorney brings it to David’s attention that 142 of the 533 offspring of his once-frozen sperm are now looking to reconnect with their biological father. A class-action lawsuit brews, and brings media attention to the case. Equipped with a thick file containing the identities of 142 of his progeny, David sets about tracking them down one by one. He attempts to take a positive role in the lives of the handful of young adults that he manages to engage — which predictably isn’t many.

Part of the film’s failure derives from the way the script overshoots the mark regarding the number of kids David has given life to. Had the number been three or even four, the story could have had somewhere to go. As it stands, the film’s drawn out climax washes over the audience like a mudslide of dead narrative weight. 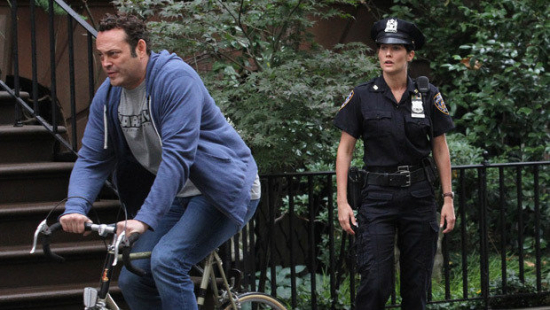 From a social commentary perspective, “Deliver Man” misses the mark on purpose. If anything, the filmmaker’s pro-life message gets muddled to the point of distraction. David is accepting, if not entirely empathetic, regarding one of his sons' homosexuality. He goes the extra mile to visit and spend quality time with his disabled son who is confined to a wheelchair and unable to speak. However, the reality of the situation is that he hasn’t been a father to these kids and he never will be because there simply isn’t enough of him to go around. With effects of overpopulation crushing the planet’s natural recourses, the “Delivery Man” should probably have kept it in his pants.