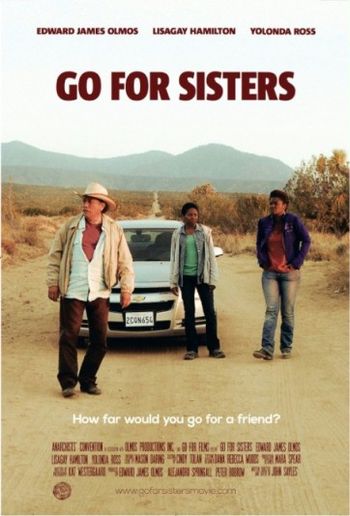 Even a genius can have a dumb day. I'm sad – and somewhat surprised to report – that John Sayles’s latest effort is a dud. Still, even if the legendary independent filmmaker never made another great movie, the auteur responsible for such instant classics as “The Return of the Secaucus Seven,” “The Brother From Another Planet” and “Matewan” will go down in history as an innovator of politically and culturally important films. Don’t forget “The Secret of Roan Inish,” his mythology-charged ode to children’s cinema and a significant addition of the magical realism movement.

Anyone fortunate enough to have seen “Lianna” (1983) or “City of Hope” (1991) at the time of their release understands Sayles’s remarkable skill at creating films seemingly ahead of their time.

“Go for Sisters” is another matter. Obviously, the title is a nonstarter. It comes from a line of dialogue between two African-American women — Bernice is a Los Angeles probation officer and Fontayne is an ex-con under her supervision. Bernice (LisaGay Hamilton) and Fontayne (Yolonda Ross) also happen to have been best friends in high school, at a time when they could pass for sisters — or in slang-speak, “go for sisters.” The strained simile is a microcosm of the labored dialogue and plotting that plague this misfire.

As in all of Sayles’s movies, the balance of inertia falls more on character than plot to drive the story. Except that here, the balance tips so far on fuzzy character objectives that the movie comes to a standstill on more occasions than you can comfortably count.

With her masculine bearing, LisaGay Hamilton’s Bernice seems a natural romantic object for Yolonda Ross’s Fontayne, a woman in touch with her animal needs. The movie flirts with such an emotional trajectory, however, nothing much comes of it.
Bernice’s young adult son Rodney goes missing after returning from military service. Bernice has been out of touch with Rodney for some time when she learns that one of his associates — a man called “Fuzzy” — has been brutally murdered, and the cops are looking for her son in connection to the crime. Bernice seeks out Fontayne’s assistance to connect with Freddy Suarez (Edward James Olmos), an ex-LAPD investigator commonly referred to as “the Terminator,” to track down Rodney. A trip to Tijuana is required. A Chinese mob trafficking Mexicans across the border might hold the answers to Rodney’s disappearance.

Edward James Olmos — a producer on the film — delivers a grounding performance that compensates somewhat for the film’s lackluster dialogue and stilted performances from some of its less-than-experienced actors.

However flawed, “Go for Sisters” is worth seeing for diehard John Sayles fans. Sadly, it is not likely to win over any new members to that community of filmgoers.

Listed below are links to weblogs that reference GO FOR SISTERS: