« GO FOR SISTERS | Main | THE GREAT BEAUTY — THE CRITERION COLLECTION » 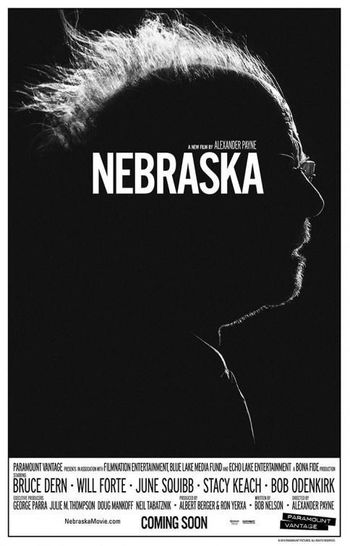 Alexander Payne’s films have been a series of peaks and valleys. His first two movies “Citizen Ruth” (1996) and “Election” (1999) set such a high standard of socio-political satire that there was no place left to go but down. “About Schmidt” fulfilled that inevitable lull with an aging small-minded character whose greatest legacy was the years he squandered for a thankless company. Then came “Sideways” (2004), a movie soared as a masterstroke of nuanced comedy about male-midlife-crisis that gave Thomas Haden Church a chance to shine like never before. “The Descendants” (2011) was a flawed precursor to the themes of America’s cultural, economic, and political demise that Alexander Payne nails on every level in “Nebraska.”

The film’s majestic title evokes the Midwestern badlands where man is dwarfed by a big sky and a rugged terrain that simultaneously dwarf and glorify his existence. Payne appropriately shoots in black and white to lend a nostalgic quality that filters the satirical nature of the drama, and contextualizes its comedic elements. The monochromic presentation clarifies “Nebraska’s” somber atmosphere to measure the symptoms of a country sinking in a darker economic crisis than that of the Great Depression. Still, neither context nor subtext is ever telegraphed. Every scene and line of dialogue presents new revelations of purpose and place.

Woody Grant (Bruce Dern) is an aging alcoholic family man suffering from the onslaught of dementia. He can’t drive anymore, but dreams of buying a new truck. He views himself as a failed patriarch, and by the look of things he’s not wrong.

The film opens with Woody distractedly walking along a Montana highway like a close cousin to Harry Dean Stanton’s character at the beginning of “Paris, Texas.” The 76-year-old Bruce Dern inhabits Woody so thoroughly that you genuinely worry about his well-being. Like Robert Redford’s career-topping performance in this year’s “All is Lost,” Bruce Dern’s portrayal here is astonishing for its unadorned directness. Nothing is wasted. Nothing is lost. Everything flows. Everything matters.

David (Will Forte), one of Woody’s two sons, is a loser. He sells electronic equipment in a retail store. He recently broke up with his former live-in girlfriend over commitment issues. Forte — famous for his run on “Saturday Nigh Live” — is a revelation for his concealed comic delivery. Forte carves his character’s initials with evermore-determined incisions toward a sincere crisis decision of emotionally cathartic consequence. This is a movie that will live on in your heart forever.

Woody’s wife Kate (June Squibb) can curse like a sailor, and frequently does when her salty demeanor veers into ribald territory. A graveyard visit proves a guffaw inducing event when Kate lets loose. Payne knows exactly where to let humor pounce, and pounce it does with a precision that stings.

Woody recently received a Publishers Clearing House-type document in the mail that he is convinced means he’s won a million-dollars. He is determined to travel to Nebraska to collect his winnings in person. He doesn’t trust institutions like the post office, but he is all-too-trusting of people. Sympathetic to his father’s fragile mental and physical state, David elects to take time off from his job to drive his dad to Nebraska as an excuse to spend some quality time with the old man. The father-and-son road trip through Wyoming and South Dakota allows for a stop-over in Woody’s hometown of Hawthorne, Nebraska where family and “friends” come out of the woodwork after hearing about Woody’s windfall. Woody’s ex-business partner Ed Pegram (Stacy Keach) is an especially prickly customer.

Written by debut screenwriter Bob Nelson, “Nebraska” strikes at a distinctly American mindset of jealousy, greed, and betrayal that undermines its citizens’ equally persistent sense of optimism, integrity, and familial connection. It’s an adult family film worthy of repeated viewings over the Thanksgiving and Christmas holidays, when families join together in living rooms to share personal experiences, ideas, and hopes for the future. The elusive new value that America seeks is right under its nose; it’s also in the underlying theme of this truly wonderful picture.

Listed below are links to weblogs that reference NEBRASKA: