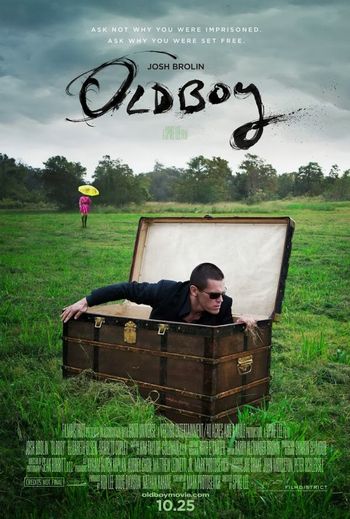 Korean director/co-screenwriter Chan-wook Park’s haunting 2003 revenge drama “Oldboy” is one of the most unbearably intense films ever made. Based loosely on a Japanese graphic novel, the movie is the second installment in Park’s “Vengeance Trilogy” — see “Sympathy for Mr. Vengeance” (2002) and “Lady Vengeance” (2005). However, there are elements that make “Oldboy” a much rougher ride for the audience than Park’s other two violence-fuelled crime thrillers in the trio. “Oldboy” is a more disturbing and rewarding experience due to the nature of the terrible reversals suffered by its forever-tormented protagonist of the film’s title. “Oldboy” refers to a fraternal term of endearment for the alum of a private high school.

The original film’s complex themes revolve around social commentary regarding Asian nationalism, politics, incest, private prisons, as well as taboo cultural mores and motivations. It is a richly multifaceted film that addresses a wide range of deeply personal and political issues in a simultaneously direct and metaphorical manner. Chan-wook Park’s “Oldboy” is an outrageously original cinematic vision that only a fool would attempt to revise without paying acute attention to elevating the source material — if not at least playing the song as written.

Why then would Hollywood choose to remake an extraordinary (and recent) film whose fingerprint is so specific? Stephen Spielberg takes the blame for stepping up to the plate to remake “Oldboy,” initially with plans to cast Will Smith in the leading role that Choi Min-sik made his own as Oh Dae-su in Park’s original. A screenplay adaptation by Mark Protosevich (“I Am Legend”) was passed around Los Angeles. Put Protosevich’s tone-deaf adaptation into the hands of Spike Lee, and what you come up with is a flavorless revenge movie robbed of every ounce of cultural identity, nuance, and emotional power of the original. Lee’s version of “Oldboy” isn’t so much transposed, as it is a gutting of all the best aspects of the original. I’m certain there are qualified screenwriters and directors that could have transposed Park’s film into a Western-culture harmonization and kept its narrative intact — especially the original film’s divine ending.

Chan-wook Park’s formidable protagonist eats a live octopus after escaping 15 years of kidnapped captivity inside a private incarceration facility. No such scene of primal expression exists in Lee’s version.

The octopus scene’s elimination is a representative example of the kind of heavy-handed editorial alterations the filmmakers repeatedly commit in reducing a great film to a mediocre one.

The original scene is more than a little upsetting; it cuts right through to the viewer’s heart and stomach in a way that Spike Lee’s version never approaches. The visceral connections are missing.

There is no redeeming value to Spike Lee’s remake of a Chan-wook Park’s instant classic “Oldboy” — a cinematic experience that is irrefutably unlike any other you have ever had.

The beginning, middle, and ending of Lee’s “Oldboy” are all different from Chan-wook Park’s film. To expose the differences between the two versions would only serve to dignify Spike Lee’s abomination, or give away any more jolts or surprises from the prototype version.

The only usefulness of Lee’s travesty is to alert would-be audiences that they should see, or revisit, Chan-wook Park’s incredible film. But by no means should anyone squander the time they would spend watching Chan-wook Park’s “Oldboy” on Spike Lee’s deflated rendering.

Listed below are links to weblogs that reference OLDBOY: