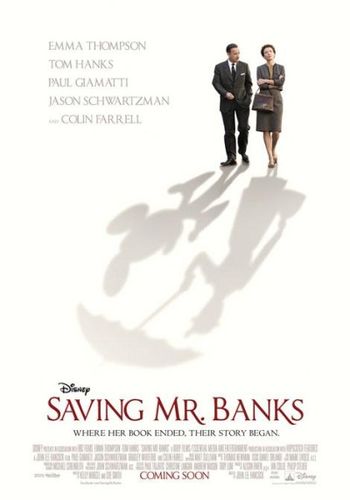 A tailor-made Hollywood crowd-pleaser, “Saving Mr. Banks” deploys as much fantasy as fact in telling Walt Disney’s tenacious efforts to transform “Mary Poppins” into a movie — with the necessary approval of its popular children’s book author. Emma Thompson has the thankless task of playing British novelist P.L. Travers, whose fierce temperamental nature comes through in little things she says and does while being hosted by Walt in Los Angeles in order to collaborate on the screenplay and music for his planned film production of “Mary Poppins.”

Mrs. Travers has demands — lots of them. She insists that all production meetings be tape-recorded. The lady from London (by way of Australia) insists that every American she meets call her “Mrs. Travers.” No one complies. She is not amused.
The ever-reliable Paul Giamatti steals the show in a subplot as Ralph, Mrs. Travers’s regular chauffeur. The slow-burn bond that develops between “Missus” and Ralph gives the movie some of its best scenes. Still, there are plenty of ensemble sequences — many involving singing — that turn the picture into an actors’ love fest.

Emma Thompson nearly levitates in her role as a strong-willed woman with a sophisticated editorial wit and style. Tom Hanks is smooth as silk in the foil position of the soft-and-generous antagonist, who belies the real Walt Disney’s less than delightful reputation. It’s fun to read between the lines and imagine Hanks’s Disney as a cunning corporate raider winning in a battle of dominance over the real P.L. Travers. You have to admit — as Mrs. Travers constantly complains — the “animated penguins” were a bad idea in Disney’s version of “Mary Poppins,” a children’s movie that hasn’t withstood the test of time.

Although Mrs. Travers is suffering from money problems — she’s broke — she has no loss of ego when it comes to defending the purity of her book. Her relationship with her father, Robert Goff Travers (Colin Farrell), informs her character’s motivations in concise flashback sequences that provide essential insight into Mrs. Travers well-defended mindset. There’s a twist to the story that is presaged in the film’s obfuscated title.

A daily script-meeting schedule on Walt’s production lot puts Thompson’s suffer-no-fools character in Disney’s piano-equipped studio with sibling songwriters Richard Sherman (Jason Schwartzman) and Robert Sherman (B.J. Novak). “Impromptu” brainstorming scenes glue the movie together. Everyone’s editorial voice and musical imagination is heard — some more than others. Animated discussions — over whether a note goes up or down — are rewarded with performance examples that reveal hands-on aspects of inspired musical creation.

It doesn’t hurt that the filmmakers had access to actual tape-recorded documents of the work sessions with the mercurial novelist and Disney’s right-hand men. Mrs. Travers was clearly onto something in requiring that the workshop sessions be recorded.

Everyone likes to peek inside a recording studio where music is being created. There’s something innocently voyeuristic about it. Having a producer as opinionated as P.L. Travers drove her equally biased collaborators to distraction, but it also forced them to create better work.

The studio story-within-the-story enables something that you rarely see characters do in movies — work. Watching how these polar-opposite artists come to agree on issues that seem insurmountable — Mrs. Travers demands there be no red in the movie, for example — is half the enjoyment of watching “Saving Mr. Banks.” The other half comes from the fine performances, not the least of which belong to Emma Thompson.

Listed below are links to weblogs that reference SAVING MR. BANKS: