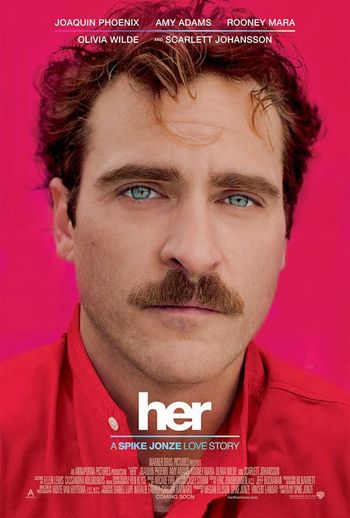 Where Spike Jonze once soared using magical realism — albeit written by someone else — as his guide (see “Being John Malkovich”) he now flounders with a self-penned technology driven story that shrivels before your eyes.

Set in the not-too-distant future, “Her” involves a long distance romance between Theodore Twombly (Joaquin Phoenix), a recently separated writer of personalized letters for every occasion, and Samantha (voiced by Scarlett Johansson), a software-program love-interest of limited potential — think “Siri.” Samantha (or “OS1”) is billed as, “the world’s first intelligent operating system.” I suppose Jonze never heard of Siri.

The tone is a light comedy with a drop of tepid social commentary thrown in for good measure. The effect is one of intellectual and physical impotence. Imagine a flawed cross between Walter Mitty and “Lars and the Real Girl” and you get the gist.

Jonze transforms Los Angeles into a sanitized smog-free mecca WITH vaguely Asian aesthetics where minority cultures have been scrubbed away beneath a forest of shiny high-rise buildings. Dark-skinned people don’t exist. We may as well be watching events unfold on an alien planet that has mirrored our own through a whitesplaining mirror. The atmospheric self-consciousness extends to Theodore’s introverted character as a socially awkward geek who takes to engaging in a romantic relationship with a mechanized phone-sex “consciousness” like a teen hacker to rough code. "The Man Who Loved Women," this isn’t.
Regardless of how “normal” Joaquin Phoenix attempts to make his character, Theodore is an emotionally stunted man who is more pathetic than empathetic.

With Samantha as his constant companion, Theodore is happy — perhaps for the first time in his life. From the outside he might seem like guy who constantly talks to himself because, well, that’s what it seems is going on. Supposedly, Theodore is teaching Samantha how to be and feel more human. So, in effect, we are watching a guinea pig improving a beta program with a sultry voice — kudos to Scarlett Johansson for some excellent voiceover work.

All concept and style, “Her” floats around like a clinical bubble that pops. There isn’t any pay off— emotional or otherwise. The picture might be attractive if bland to look at, but “Her” doesn’t have the thematic development necessary to fulfill the viewer. Where a film like “Lars and the Real Girl” brought its painfully lonely protagonist to a place of emotional centeredness though the efforts of a community of concerned individuals, “Her” remains too aloof for any such realization. The movie doesn’t want to get its hands dirty.

Listed below are links to weblogs that reference HER: