THE WOLF OF WALL STREET 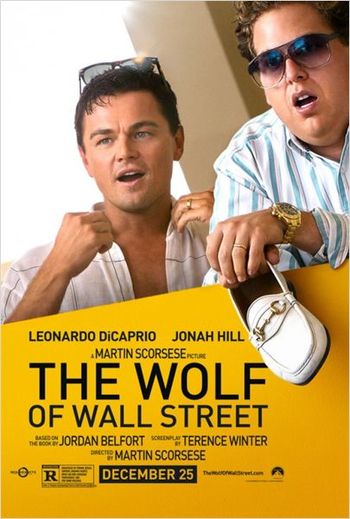 There is no reason to see Martin Scorsese’s latest picture. Centered around its irredeemable greed-crazed anti-hero antagonist Jordan Belfort (Leonardo DiCaprio), “The Wolf of Wall Street” is an oddly inert piece of capitalist voyeurism that worships at the altar of its host. Try as it might — and it tries valiantly, flailingly — this film never comes to life because it doesn’t take a stand. It isn’t about anything. To call it a satire would be incorrect. You could posit that this memoir is about the drug-and-sex-addicted face of unbridled greed, but that isn’t enough to base a movie on — at least not this movie. “The Wolf of Wall Street” is a mistake.

If you don’t already know, Jordon Belfort is the scrappy real-life conman who made (stole) millions, if not billions of dollars from investors with a boiler-room brokerage house built on crappy penny stocks during the ‘80s and ‘90s. Belfort was eventually indicted for his crimes: he spent 22 months playing tennis in a cushy white-collar prison, paid a fraction of the restitution money he was sentenced to cough up, and went on to become a highly-paid motivational speaker. He now makes big money based on the sale of his two volumes of memoirs, and now on Scorsese’s film version of the first of these — although after backlash against the film he has promised to turn over royalties from the film to families of his victims — publicity notwithstanding. If you have little inclination to contribute to this unrepentant criminal by paying to see “The Wolf of Wall Street” or by purchasing Belfort’s books, it is an understandable choice.

The film makes clear the fact that all Wall Street investment companies — from fringe operations such as Belfort’s “Stratton Oakmont” company to gargantuan investment banks such as Goldman Sachs — make money hand-over-fist based on nothing but fiction. But this comes across as a minor footnote to the primary action, which is Belfort indulging in every temptation he can lay hand or penis upon.

Is it entertaining to watch Leonardo DiCaprio’s vile frat-boy persona rise to unfathomable success armed by the self-denial that he will ruin the lives of everyone whose life he touches? No, it’s not. No amount of cheesy sex scenes can distract from the fact that we are watching a movie in which the only vaguely respectable character is the FBI agent working to tear down Belfort’s house of cards.

Scorsese reverts to the often-overused voiceover narration device that guided “Goodfellas.” The script-rule-breaking contrivance worked in “Goodfellas” for any number of reasons, not the least of which is that it helped fuel the film’s suspense. It didn’t hurt that Ray Liotta’s blue collar Henry Hill gangster character was a lovable loser caught up in something he couldn’t control.

Jordan Belfort may be a rank amateur compared to the Wall Street masterminds that heisted America’s economic resources and ran away with the money, but he remains an incorrigible individual worthy of not one iota of empathy, much less admiration. He might view himself as a modern-day Caligula, but Jordan Belfort is no Gaius Julius Caesar Augustus Germanicus — not even close. Also, Leonardo DiCaprio is no Malcolm McDowell. Martin Scorsese, for that matter, doesn’t have the surreal sexual fascination of Tinto Brass, the director who luxuriated in depicting the outré debauchery of the Roman Empire’s third Emperor in his 1979 film.

Listening and watching Jordan Belfort recount his wild tales of sex, drugs, and money-laundering schemes as if he were the inventor of the light bulb, is akin to listening to a 14-year-old kid trying to convince you that he holds all of the world’s knowledge in his unformed brain. It’s just boring.

Scorsese’s attempt to transpose the kind of nuanced character studies of Italian mobsters he built much of his career upon (see “Mean Streets”), to the realm of Wall Street hucksters simply doesn’t fly. Jordan Belfort and his crew of dimwitted phone-dialing pitchmen don’t have the vision, integrity, panache, or intimate contact with their work to which the gangsters of “Goodfellas” or “Casino” were committed. If anything, Jordan Belfort represents the ultimate consumer. He prides himself on taking enough daily drugs to sedate New York City for a month. Belfort is easily impressed with himself. The audience — not so much.

Screenwriter Terence Winter attempts to bring the movie to a thematic head during a speech that Belfort gives to his hundred or so employees. Having agreed to cooperate with federal investigators by departing from the company he started, Belfort tells his staff a story of advancing $25,000 to an employee to pay for her child’s “tuition” — presumably to a private elementary school. She blushes and publicly pronounces her undying love for him, which Belfort vociferously returns. The scene reeks with a patronizing and condescending tone that sums up the film. Jordan Belfort isn’t such a “bad guy” because, after all, he was generous to a poor white lady in her time of need. Cough. It’s disgusting to see Scorsese attempt to play his audience for the same kind of suckers that Belfort robbed blind.

The shell game that its distributor (Paramount Pictures) has played with the independently financed, and hurriedly edited, film alludes to the company’s insecure handling of the picture. There’s a reason “The Wolf of Wall Street” won’t be on too many awards and top-ten lists. The movie was kept hidden until the last minute for good reason. Paramount’s president of domestic distribution Don Harris has predicted a “very, very, very, very” successful return on the company’s investment in “The Wolf of Wall Street.” Anytime you see that many “verys” you can be sure that the pitchman spinning them is about as a reliable as a broker trying to sell you phony stocks with the closing line, "excellent choice" — my ass. Here is a picture as fake as its subject. It doesn’t even deserve a grade.

Listed below are links to weblogs that reference THE WOLF OF WALL STREET: