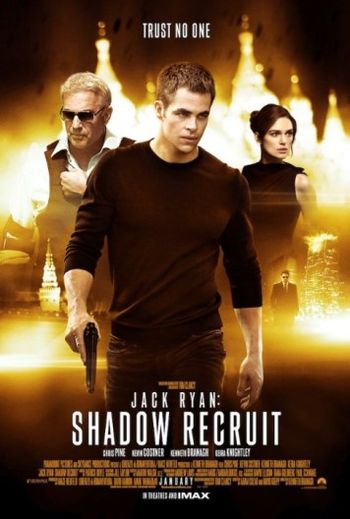 For a decidedly no-frills spy thriller, Kenneth Branagh directs a respectable rendering of Tom Clancy’s shop-worn Jack Ryan superspy character. Still, Branagh is no action-film director, and it shows. Chase scenes cut away too quickly for the audience to savor the dogfights on display — as when Jack (Chris Pine) rides a motorcycle at a 120-degree angle against a concrete lane divider in hot pursuit of a bomb-packing terrorist. What should be a heart-in-your-mouth moment gets lost in a throwaway quick-cut. Equally to blame for its systematic failings are the film’s screenwriters. Adam Cozad and David Koepp get in over their heads in attempting to construct a narrative based on Tom Clancy's characters, rather than on a specific novel by the deceased right-wing author. Every plot point has a mechanical feel to it. Narrative gears grind. Even when the action heats up, it doesn’t always carry over into the scenes that follow.

As the title suggests, the story tells the onset of Jack Ryan’s career as a covert CIA operative. A drawn-out yet busy first act introduces Jack as a mathematical whiz kid who also happens to be a fit physical specimen. Chris Pine proves to be a casting coup. He’s a powerhouse actor along the lines of George Clooney. As with his impressive work in the rebooted “Star Trek” franchise, he carries a grounded sense of gravitas. Pine puts a fresh face on the Jack Ryan mantle formerly worn by Alec Baldwin (“The Hunt for Red October”), Harrison Ford (“Patriot Games”), and Ben Affleck (“The Sum of All Fears”). He’s better than all of those portrayals combined. Pine’s Jack Ryan has the intellectual persuasiveness to balance the boyish twinkle in his eye. There’s a hint of easygoing humor that resonates against the nuance-free politicized material on hand.

Ryan falls romantically for his physical-therapy doctor Cathy (Keira Knightley) after a helicopter crash in Afghanistan leaves him barely able to walk. Knightly and Pine don’t share the strongest onscreen chemistry but the pairing is serviceable enough. As Ryan’s secrecy about his day job tests Cathy’s trust, his immersion as a point-of-the-spear spy deepens. Jack’s patriarchal CIA mentor Thomas Harper (Kevin Costner) assigns him a trip to Moscow to head off a Russian plot to crumple the US economy led by banking mastermind Viktor Cherevin (Kenneth Branagh). A first-kill sequence inside Jack’s Moscow hotel suite steals liberally from “Casino Royal” — the James Bond picture that established Daniel Craig as the new face of 007. Still, it makes the point that Jack is equipped to handle surprises.

Branagh’s acting duty as Russian baddie Viktor Cherevin allows the classically trained actor to melt scenery with a thick accent that withers those of weak constitutions. Jack Ryan is immune. Branagh’s tightly wound performance is a cool reminder of what actors mean when they talk about creating a character. Viktor is so diabolically evil you can’t help falling for Branagh’s slow-burn intensity. One scene in particular — in which he tortures a female hostage with a fluorescent light bulb in the back of a moving van — is delightfully reptilian.

Branagh, the director, shrewdly veils Viktor’s evil persona in a shroud of mystery. Another layer of intrigue arrives in the form of Mikhail Baryshnikov’s uncredited role as a ruthless Russian mob boss. Between them Branagh and Baryshnikov create a credibly malevolent climate of simmering violence.

Listed below are links to weblogs that reference JACK RYAN: SHADOW RECRUIT: