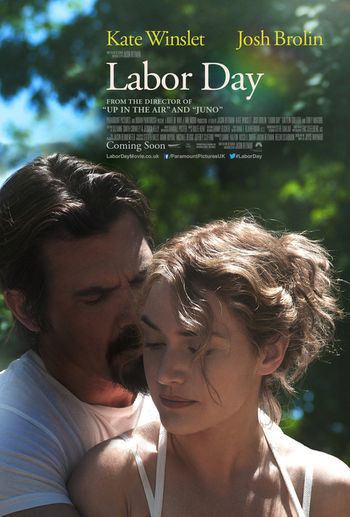 There’s almost a movie — one with serious incest issues — hiding somewhere in writer/director Jason Reitman’s bleary attempted adaptation of Joyce Maynard’s novel. The story revolves around Frank (Josh Brolin), an ex-con who takes Adele, a depressed single mother, and her 13-year-old son Henry hostage after escaping via a second-story hospital window. Blood from Frank’s fresh appendectomy is still seeping through his T-shirt when he comes across mother-and-son shopping in a New Hampshire department store.

The director behind such milquetoast social-commentary excursions as “Thank You For Smoking” (about the tobacco industry) and “Up in the Air” (about corporate downsizing) goes straight for soap opera romance this time around. The film’s bubble-bath effect may possibly appeal to its target audience of middle-aged Caucasian housewives, but other collective stereotypes will likely not be so moved.

It’s the mid- '80s. Frank isn’t as menacing as his dire circumstances and bloody appearance make him seem, at least not after he gets Adele (Kate Winslet) and Henry inside their cozy home. He only briefly ties them up for appearances — in case the cops show up right away. Though under the hot threat of violent arrest, Frank is a calm and collected pushover looking for love. More importantly, Frank is looking to fulfill his smoldering patriarchal and maternal desires. He may be a tough guy, but Frank is also a regular homemaker. Never mind that he was sentenced to 20 years in prison for killing his wife and child many moons ago; that’s another story that gets handled in flashbacks, which include television actor Tom Lipinski playing a younger version of Frank. (Lipinski’s spitting image of a youthful Josh Brolin sends chills.)

Kate Winslet’s Adele is a dejected agoraphobe who can’t get her car into reverse without the help of her strangely detached son Henry (Gattlin Griffith). The story is told from Henry’s perspective as an unreliable protagonist who is just as likely to sabotage his mom’s newfound romance as he is in helping.

Since his father ran off with his secretary, Henry and his bipolar mom have entered into an uncomfortable relationship in which she has become a surrogate girlfriend. They practice dancing together. Adele puts a lot of stock in a man’s ability to dance. Henry has taken his mom on movie dates. The story teases at an underlying subtext of incest on several occasions — the most obvious occurs when Henry listens to his mother’s and Frank’s lovemaking sessions while wondering in voiceover narration about his own inability to appease his mother’s sensual desires. Freaky. A birds-and-bees lecture Adele gives Henry has her emphasizing the way sex “feels” over traditional concerns of emotional commitment, sexually transmitted diseases, or pregnancy. In the hands of competent staff, this would be worth exploring. As things stand, the filmmakers and actors seem oblivious to the bizarre subtext at hand.

Things get especially peculiar during a suggestive cooking session in which Frank instructs Adele and Henry on how to make a peach pie. The three characters stick their six hands simultaneously into the goop, manipulating the peaches in a display of tactile sensuality that the website epicurious.com named the “World’s Sexiest Peach Pie.” Don’t ask.

During the three-day weekend, Frank goes into patriarchal overdrive, fixing the family car, squeaky doors, and teaching “Hank” to throw a baseball. Of course he’s also busy loving up Adele and warming her up to the idea of making a run for the Canadian border.

Henry manages to fit in a romantic dalliance with a know-it-all girl who tries to convince him that Adele and Frank will surely abandon him so they have sex without him around.

There are so many weird strains of tone-deaf subtext running through “Labor Day” that you have to accept the movie for what it is: a poorly written movie based on a poorly written novel. It might draw tears from the ladies-that-lunch crowd, but this movie rattles like a broken blender.

Listed below are links to weblogs that reference LABOR DAY: