SEALS Out of Water and Facts
How a Goat Herder Handed The U.S. Military its Ass 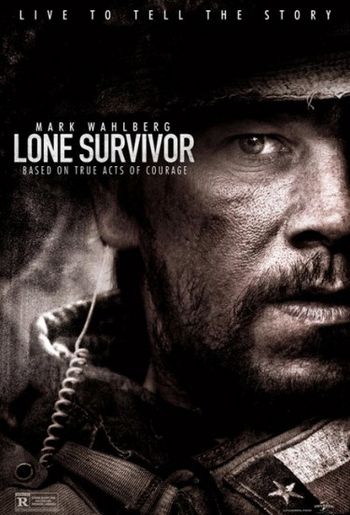 All films are political. All film is propaganda. Conscious awareness that Peter Berg’s seemingly straight-ahead war picture is little more than a two-hour recruitment commercial designed for the U.S. military to seduce testosterone-filled American males more interested in the size of their biceps than in using their minds to advance their lives is part and parcel of the film’s equation.

Indeed, after a grossly exaggerated near-death “flat-line” hospital monitor reading for our potential “lone survivor,” (the event never actually occurred) the film’s first ten minutes is spent showing a group of Navy SEAL trainees being physically pushed beyond the limits of what the human body can, or at least should, withstand. Young grime-covered Caucasian hard-bodies glisten with sweat as their grimacing faces depict the ferocity of their ostensibly dark intentions during extreme physical drills.

You might ask yourself, what if these strapping young men turned all of that ego-pumping energy into something less Sisyphean? Such questions are not encouraged in the film’s narrative. But, you may as well have some fun before the movie starts to beat you up.

And beating up its audience — through the vicarious experience of watching four SEALs suffer like you’ve never seen soldiers suffer before — is what’s on the menu.

Based more loosely on the facts than the filmmakers want you to know, on retired Navy SEAL Marcus Luttrell’s memoir about Operation Red Wings, a failed January 2005 mission in Afghanistan’s Kunar province, “Lone Survivor” follows a standard script template. First-act character introductions arrive during the plotting of a military mission with “a lot of moving parts.”

Our team of four fearless SEALs is dropped into Sawtalo Sar, an inhospitable mountain range overlooking an al Qaeda stronghold where Ahmad Shah, an “al Qaeda” bad guy resides in a walled-off compound. Shah is credited with killing “20 Marines,” although the facts of the real story differs considerably since only “two U.S. soldiers or Marines died in Kunar province in 2005 before Operation Red Wings” took place. The name of the game here is propaganda, so just realize that every "fact" and figure that the characters spout is a vast overstatement.

The crux of the action is what happens to our four soldiers after they take position on a mountain from which they can telescopically view their human target walking comfortably with his associates inside his compound. Nonetheless, it’s too far to take a kill shot — besides their mission is one of “surveillance and reconnaissance.” One thing the troop and its planners didn’t take into account was the possible presence of local civilians, such as a goat herder and his two sons who happen upon the soldiers with their metaphorical pants down.

Naturally, the SEALs take the civilians captive and discuss how to proceed now that their cover has been blown. Killing or tying up the locals is out of the question. You might imagine that the U.S. military would have a standard logistical solution for such an ostensibly typical predicament. You’d be mistaken. The soldiers’ satellite phones don’t even work properly from their remote location. The team makes a decision they will soon regret. They let their captives go free. The youngest son is a fast runner adept at traversing the rocky Afghan terrain that has proven challenging to every military force that has ever attempted to invade it.

Much of the action is augmented to provide more shoot-‘em-up spectacle than actually occurred. The real number of Afghan fighters who attacked the encroaching SEAL team was considerably less, a lot less, than what you see onscreen. That doesn’t mean your stomach won’t tighten up in knots when the big battle heats up and continues for 40 seemingly interminable minutes.

The troop finds itself locked in an intense firefight on dangerous terrain. Bullets rip. Bones are smashed. Bodies fall, roll and smack into rocks and trees. Flesh tears. Blood gushes. This is why we are here, to experience an unimaginable fight to the death. To that end, the filmmakers do a great job of infecting their audience with pain and fear.

It is possible, even probable, that young men watching “Lone Survivor” will walk out of the cinema sufficiently jacked up on adrenaline to go running off to military duty to avenge the deaths of U.S. soldiers like the ones who perished during Operation Red Wings.

However, another reading of the film’s subtext reveals a glaring issue with the why and how America got itself into a war it has lost at every turn, regardless of how much money or how many lives have been thrown at it. A better choice for impressionable boys might be to look into the history of Afghanistan as a clan-based feudal country that has never been successfully occupied by any invading force.

“Lone Survivor” is a grueling movie that tips its pro-war hand in the liberties it takes with the facts surrounding a botched military mission. If the movie had stuck closer to the facts, then perhaps it might have had a chance of representing something more than merely another throwaway piece of patriotic breast-beating. But go ahead and step on the cinematic roller coaster; the chances are good you’ll survive if you don’t buy into the flimflam.

Listed below are links to weblogs that reference LONE SURVIVOR: