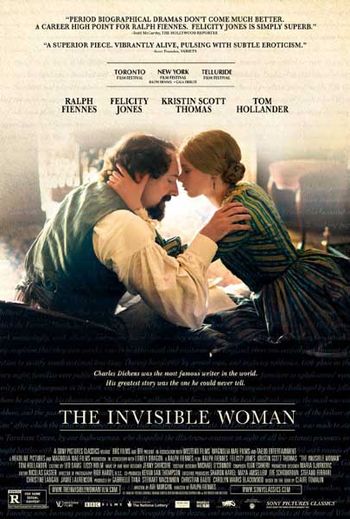 She walks in long skirts at a swift tempo across the windswept ocean shoreline every morning, traveling to her job as an elementary school drama teacher at a Protestant school. Hers is a mission of deep secrecy imposed by the 19th century’s greatest Victorian novelist. Nelly Ternan (played by Felicity Jones) no longer holds in her heart and mind the reverence she once had for Mr. Charles John Huffam Dickens. All of that is gone, lost forever, but not forgotten. The romantic spell that Charles Dickens cast on her — or was it the other way around — was a temptation too great, and its outcome too predictable in light of the social mores of 19th century England. Despite her mother’s best efforts to head off the incipient affair, love would have its way and damage would be done.

Ralph Fiennes’s second directorial venture — following his adaptation of Shakespeare’s “Coriolanus” — is the closest thing to a Merchant Ivory production to come along since that venerable company closed shop. Although often mocked for their somber adaptations of Henry James and E.M. Forster novels, the 2005 death of Ismail Merchant has left a cinematic void that has yet to be filled.

So it is not without consequence that Ralph Fiennes brings his keenly honed dramatic sensitivities to fleshing out a man whose legendary books (see “David Copperfield” and “A Christmas Carol”) continue to fire the imaginations of their readers more than a century and a half since they were written. Fiennes performs dual duties by inhabiting Dickens — he acts as well as directs — as a thriving middle-aged family man capitalizing on his local renown. He gives staged readings from his works in theaters packed with loyal fans. He revels in the flirtatious sway he holds over every member of the fairer sex that shamelessly greet him after each public performance. Still, his commitment to writing always comes first.

Fiennes’s Dickens is a lusty creature bored with his matronly wife, and capable of going the necessary lengths to fulfill his desires for a young London actress whose wobbly abilities onstage hardly match her nubile charms and remarkable intellect. An enjoyable paradox lies in Felicity Jones’s period incarnation of a young proto-feminist struggling with societal constraints at odds with her own desires for the man whose books she reveres above all others. She has truly been “changed” by his books. Soon, she will be changed by the love she shares with their author.

As much as Ralph Fiennes’s characteristically charismatic portrayal of Dickens anchors the film, it is Jones’s subtle but dynamic performance that resonates. Her half-whispered intonation and commanding poise seethes with a voraciousness of body and soul. The romantic vibrations that emanate from the film come directly from Jones, whose acting career seems at the precipice of a mainstream breakthrough.

Fiennes based this film on Claire Tomalin’s 1991 book “The Invisible Woman: The Story of Nelly Ternan and Charles Dickens.” His close attention to every detail of atmosphere, costume, and manner supports the film’s thematic purpose examining the destructive power of forbidden passion between a celebrated author and the force of nature that fuels his ambition. The picture is more feminine than feminist in that it concentrates on the female consciousness. We come to understand the hardship that Dickens inflicts on his long-suffering wife Catherine (wonderfully played by Joanna Scanlan), as well as that of Nelly’s perceptive mother Frances (Kristin Scott Thomas). Moreover, we come to comprehend the balance of generational obligation that Nelly carries with her in a life fully lived.

Listed below are links to weblogs that reference THE INVISIBLE WOMAN: