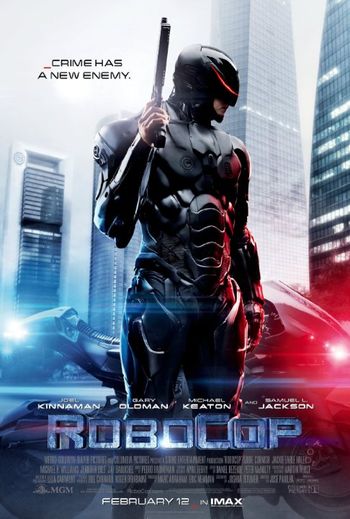 For the long-forgotten historical record, there have already been three Robocop movies — all co-written by Edward Neumeier, who is also a contributor to the latest reboot of the machine-man franchise. The first film was an earth-shattering revelation, the others not so much. What earned the first film box office success and critical acclaim, and doomed the others as failures, was Paul Verhoeven’s energetic participation. The Dutch master director's darkly comic and scathing commentary on America’s unwitting surrender toward the fascist ideologies that have consumed the country since the 1980s are as abrupt as they are poetic. Verhoeven’s visionary 1987 film was so ahead of its time that, despite its dazzling brilliance, he wasn’t brought back to direct any of its sequels. That was an injustice and a grave error.

The current version, of a near future when mechanized law enforcers plague Americans, is already dated. Red-light cameras trigger automatically generated tickets; missile-equipped drones threaten to annihilate house pets and civilians without regard to criminal behavior for citizenship status.

You can’t blame director José Padilha (known for his phenomenal documentary “Bus 174” and the gritty crime drama “Elite Squad”) for trying to break into Hollywood via a “genre” movie. It’s too bad for Padilha (and us) that he chose the insurmountable challenge of equaling Verhoeven's achievement for his attempted vertical career move. Padilha’s “Robocop” exhibits competent direction and little else.

No matter how hard the screenwriters and director strive to bridge the themes of humanity with corporate greed and scientific proof, “Robocop” is a disjointed movie that falls apart at every turn.

The film’s opening act attempts to replicate the inciting incident of Verhoeven’s original, but fails at the crucial moment when our good-cop loses connection with his mortal existence. In the original movie, Peter Weller’s police officer Alex Murphy suffered "Last Temptation of Christ"-like torture at the heavily armed hands of ruthless Detroit gangsters before losing his life in a shocking scene of despicable violence. The audience felt as though it had lost a friend. In the new version, Padilha’s camera comes nowhere near the face of the man who will be turned into a militarized killing machine. As such, the chance for an essential human connection is lost. Paul Verhoeven would never have made such a mistake.

By the time Alex (played marginally by newcomer Joel Kinnaman) is injured in such a way that he can only be reformed as part machine, too much time has passed for the audience to be engaged in the drama.

Satirical subplots, including Samuel L. Jackson as a right-wing FoxNews-styled television host, fall flat — just too blunt. There’s no nuance. Everything is too much on the nose.

As the story unfolds, its formulaic pattern overshadows the best efforts of its actors. Gary Oldman gives his ever-reliable all as the scientist responsible for transforming Alex’s head and torso into the ultimate crime-fighter. Abbie Cornish is fantastic as Alex’s caring wife Clara, and Jackie Earle Haley turns on the juice as a military software engineer responsible for the program that controls Alex’s fast-twitch abilities in the field. Alas, their best efforts are in vain.

This adaptation of the Robocop franchise had the potential to really say something about where America's corrupt militarized-global-corporate-political machine is headed. It didn’t do that. Instead, it squandered the opportunity to pussy out as just another generic Hollywood “entertainment” picture. We don’t have time for that. There’s too much at stake.