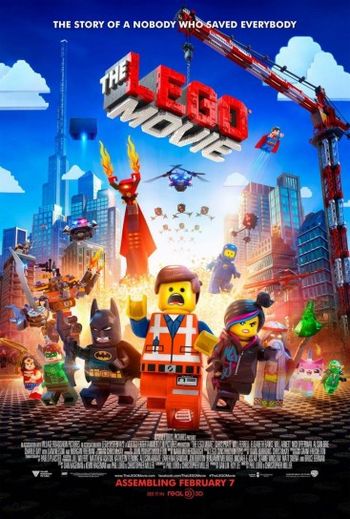 There’s a strong subtext of socio-political resistance at play in “The Lego Movie.” It may be the first mainstream animated resistance film ever made by a Hollywood studio. Beneath its over-the-top visual mishmash of American cultural iconography — ranging from a literally two-faced good cop/bad cop, to an evasive Abraham Lincoln, to Vitruvius (voiced by Morgan Freeman), an ostensibly Christian prophet à la Jesus Christ — sits an anti-1% message that seethes with a vengeance.

Forget the film’s seemingly obvious product placement of a toy from Denmark that has captured the imaginations of many generations of kids since they first became available in 1947; the movie is about much more than that.

Although its sickly rainbow of clashing colors and disjointed graphic styles inflicts sensory overload on its viewer, the film’s theme of social uprising couldn’t be clearer. Still, parents shouldn’t be too concerned that their children will be indoctrinated into seeing through the multi-national global corporate mechanism that crushes original thought and free will with its constant barrage of media-led disinformation. Such instruction would take a lot more coaching than watching “The Lego Movie” a 100 times could deliver.

The film is akin to a surreal 3D animated blending of Terry Gilliam’s “Brazil” with “The Matrix Trilogy.” Emmet (voiced by Chris Pratt) is an inveterate conformist who aspires to mediocrity. The everyman character is a simplified cross between “Brazil’s” low-level government bureaucrat Sam Lowry and Keanu Reeves’s would-be savior Neo (aka the “One”).

Emmet loves to follow rules. He doesn’t do anything not prescribed in the instructional manual he refers to first thing in the morning (“Instructions to fit in, have everybody like you, and always be happy”). Not.

Emmet doesn’t appear to have a contrarian bone in his body. He repeats a mantra of fascistic social conditioning, “Always use a turn signal, park between the lines, read the headlines, don’t forget to smile, always root for the local sports team, drink overpriced coffee.” Emmet is pleased to pay $37 for a cup of coffee because he is an ultimate consumer. He loves the corporate pap song “Everything is Awesome” that contributes to the droning consensus reality he lives in.

“Everything is awesome, everything is cool when you’re part of a team.” The sneering satirical nature of the song is so keen, that it cuts in all directions. Emmet can sing the mindless tune for hours on end.

By day Emmet is a lowly blue-collar construction worker. His programmed life does a 180-degree turn when he meets Wyldestyle (voiced by Elizabeth Banks), a cute anti-corporate Goth-girl activist attempting to capture the mysterious “Piece of Resistance” that will free humanity from the universal clampdown masterminded by President Business (aka Lord Business) as voiced by Will Ferrell. You can see how screenwriters Phil Lord and Christopher Miller (“Cloudy With a Chance of Meatballs”) toy with the unholy alliance between church, state, and corporate policy. Satirical allegories fill scenes masked by cutesy sight gags, disorienting spectacle, and tame jokes.

Lord Business is a presidential, religious, and corporate composite character that wants to glue down everything and everyone in his LEGO world so that nothing can move. His plan is indicative of where global society already seems to be headed. The threat of trigger-happy cops, NSA surveillance, random public shooters, and unpredictable weather conditions are all tacitly referred to throughout the story. You might imagine that Trey Parker and Matt Stone (“Team America: World Police”) dreamed up the premise.

Acting on an artificially invented prophesy from Vitruvius, Wyldestyle imagines Emmet to be “The Special,” a master-builder capable of capturing the Piece of Resistance. However, Emmet isn’t “the most important, most talented, most interesting, and most extraordinary person in the universe” that Wyldstyle temporarily envisions him to be. Still, that’s not to say Emmet doesn’t possess the potential to rise to the occasion, and help disarm Lord Business of his militarized stranglehold across all dimensions of the LEGO world. Herein lies the film’s message, that anyone, no matter how simpleminded, is capable of being personally responsible for leading a winning resistance against the greedy powers that enslave humanity.

The CGI wizardry on display is impressive even if lacking in editorial restraint. For a kids’ movie that manages to be eye-popping, funny, and thought provoking, “The LEGO Movie” is surprisingly fruitful. However, one obvious area the movie lacks is in its white-bread depiction of society. Morgan Freeman’s character doesn’t even have dark skin. What’s up with that?

Listed below are links to weblogs that reference THE LEGO MOVIE: