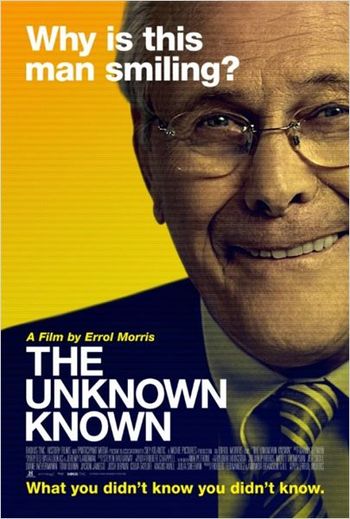 Errol Morris meets his match in Donald Rumsfeld. The notoriously contentious documentarian, whose interviews with 1960s secretary of defense Robert McNamara form the finest political documentary ever made (“The Fog of War: Eleven Lessons from the Life of Robert S. McNamara” - 2003), runs aground against McNamara's eventual successor, the Bush administration’s Donald Rumsfeld’s thousand-mile-wide and thousand-mile-high wall of bullshit. The film, however, is likely the closest the public will come to witnessing the war criminal questioned for his crimes.

Rumsfeld’s clinically devised responses are less than satisfying, to say the least. Rumsfeld, a vacuous careerist politician, has mastered the art of obfuscation so thoroughly that he doesn’t even recognize the stench of his own rotten mind. The man is such a soulless, wrongheaded, inveterate manipulator of words that he comes across as an idiot savant in love with the sound of his own voice. It would be hard to imagine any other human being speaking so much, yet saying so little.

The politician’s consistently false and evasive answers to Morris’s direct questions about events such as the migration of illegal torture techniques from Abu Ghraib to other U.S. prisons, as well as Guantánamo, leave the audience infuriated beyond belief. The fact that Rumsfeld was, and is, wrong about how and why America went into a series of wars in which it is still engaged, is part and parcel to the discussion Morris pursues with his usual tenacity. Still, Morris gets nowhere. Rumsfeld’s maddening rationalization for the death and destruction he helped foster around the world is that “stuff happens.” His classic, glib reply reflects the American government’s deeply cynical yet cunning attitude that continues to choose stupidity over wisdom for every single piece of domestic and foreign policy it administers.

Drawing parallels to "Eichmann in Jerusalem," Morris has called “The Unknown Known,” a “horror movie about history from the inside out.” I take his point. The U.S. government is filled with career politicians like Donald Rumsfeld who value only their personal ability to disengage from any responsibility for the global horrors they actively create on a minute-to-minute basis.

“The Unknown Known” is a valuable window inside the warped mind of an irrational sociopath who, like those around him during his time in Office — Dick Cheney, George W. Bush, Colin Powell, Condoleezza Rice, etc. — acted with unfathomable incompetence that they were able to disguise with the complicity of corporate news media.

On display is Errol Morris’s knack for utilizing stock footage, news clips, and beautifully layered imagery, along with evocative music, to bring resonance where there would otherwise be none — considering the vacuum bubble that is Donald Rumsfeld’s pathetic mind. Have a stiff drink before you see “The Unknown Known” — you’ll need it — but don’t miss this essential look at the abysmal state of a country known as “The United States of America.”

Listed below are links to weblogs that reference THE UNKNOWN KNOWN: