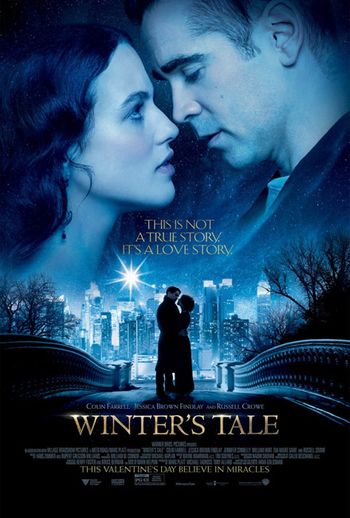 It’s a testament to Colin Farrell’s ineffable appeal as an actor that his warm-hearted performance keeps the audience awake during producer/screenwriter-turned-director Akiva Goldsman’s otherwise somnolent adaptation of Mark Helprin’s romantic fantasy set in New York. Farrell plays Peter Lake, abandoned as an infant by his rejected would-be immigrant parents to America in the early 20th century and now an adult. To his irresponsible and/or desperate parents, placing the baby Peter in a stolen model sailboat and setting it adrift in the Atlantic seems like the right thing to do in light of their dire circumstances. Bizarre, I know. Cut to a grown-up Peter working as a mechanic and cat burglar preying on the proto-1%ers along Manhattan’s Central Park West. Somewhere along the way Peter has earned the enmity of Pearly Soames (Russell Crowe), a demonic criminal kingpin intent on crushing him like a bug with the help of his gang of dapper thugs.

There is a guilty pleasure in comparing Crowe’s overbearing performance to that of Colin Farrell — an actor who represents the antithesis of everything the temper-tantrum-wallowing Russell Crowe represents. The good versus evil analogy couldn’t be more apropos. The problem is that Crowe and Farrell don’t share enough scenes together to savor their diametric differences and create tension.

Weirdness alert! The hotheaded Pearly answers directly to Lucifer, yes, that one, the Lord of Darkness. In this case Satan is named in the credits as “Judge” (played for unintended camp laughs by a horribly miscast Will Smith). Smith’s mechanically altered voice booms with authoritative import as his dubious character hears out Pearly’s plea for permission to kill Peter because, it seems, our angel-protected thief has a talent for procuring precious stones that Pearly likes to hoard. At least the movie has a little comic relief to spark audience reaction whenever Will Smith pops up onscreen.

There’s some spiritually narrated gibberish about stars and light that adds up to zilch, but the film’s impotent tone of immortal love is all that matters to the filmmakers. The key champion of the fairy dust fantasy is a wing-sprouting white horse that rescues Peter just as Pearly and his henchmen are about to shoot him. The nameless guardian horse (called “Athansor” in the novel) points Peter to a specific mansion for our scruffy thief to make his nut for the day. On the verge of cracking the house safe, Peter hears a piano played by the home’s terminally ill shut-in Beverly (Jessica Brown Findlay), a red-haired beauty. Beverly’s lithe body is riddled with consumption (a.k.a. tuberculosis). She sleeps in a tent on the roof to keep her overheated physique cool at night. Love at first sight devours the couple, and Peter attempts to keep Beverly alive with his overflowing show of affection.

Yet, just when it seems like the movie has something going for it in the romance department, a disorientating time shift sends the same-aged Peter into modern day New York where he searches for signs of his lost love.

Syrupy and bland, “Winter’s Tale” is tailor-made for bubble-headed 14-year-old girls to ooh and ahh over. It’s a heavy-handed piece of quirky melodrama told with broad strokes and plenty of artificiality. There’s just enough sensuality to pique the interest of said target audience, but nothing remotely moving for anyone that hasn’t yet shed their virginity. “Winter’s Tale” is a remedial romance movie complete with training-wheels. At least it has Colin Farrell as its doting instructor.

Posted by Cole Smithey at 11:49:28 AM in Romantic Fantasy

Listed below are links to weblogs that reference WINTER'S TALE: