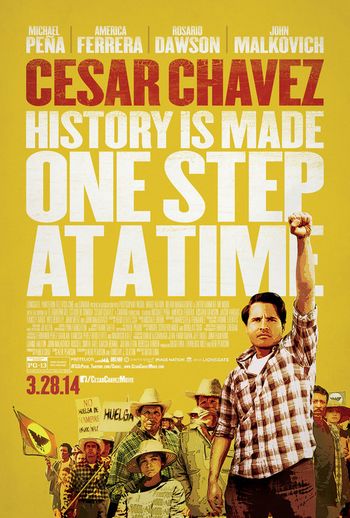 Diego Luna’s second directorial outing is a wisely succinct biopic about the Mexican farm-worker-turned-union-activist who improved working conditions for migrant laborers in America. The film, its release timed to coincide with the March 31st birthday of César Estrada Chávez (1927–1993), relies on Michael Peña’s ability to flesh out the character and substance of a man whose legacy many right-wingers would rather ignore. Peña’s stoic charisma is well suited to the role, which comprises Chavez’s poker-faced ability to speak truth to power, as well as to the angry farm workers who look to him as their leader. Chavez’s commitment to non-violence takes center stage.

Screenwriters Keir Pearson (“Hotel Rwanda”) and Timothy J. Sexton (“Children of Men”) check off other necessary boxes. Former presidents Richard Milhous Nixon and Ronald Reagan are rightfully raked over the hot coals of history for their racist diatribes against migrant workers when confronted with Chavez’s demands to improve the pay of farm workers. The filmmakers elegantly weave in archive black-and-white newsreel footage to ground the narrative in fact.

The ubiquitous John Malkovich plays Bogdanovitch, a patriarchal immigrant from Croatia and wealthy grape-farm owner who views Chavez and his migrant laborers as “children” to be punished. Although Malkovich is, if anything, too urbane for the role, he does provide the film with an easy villain for the audience to aim their anger at. His vicious character’s archetype adds to the ongoing conversation about minorities who sell out their kin as soon as they achieve any position of power or authority. Sound familiar?

The film covers the ‘60s time period, when Cesar Chavez moved with his wife Helen (America Ferrera) and their eight children, from Yuma, Arizona to Delano, California. Tired of being distanced from the plight of farm workers during his time spent working for the Community Service Organization — he was the group’s national director — Chavez is an impatient visionary, eager to get his hands dirty.

The harsh plight of Delano’s impoverished migrant workers is on display in the ramshackle houses in which they are forced to live. Chavez co-founds the National Farm Workers Association with Dolores Huerta (Rosario Dawson). Still, Cesar’s wife Helen is the first to take action whenever it’s called for. Getting arrested proves to be an awakening experience for Helen after she dares to yell “Huelga!” (strike) after a local judge makes doing so illegal.

A strike by Filipino grape pickers opens a door for Chavez to lead his group of Mexican workers to join with their Filipino comrades to demand higher wages. A grape-boycott finds supporters in American housewives.

The appearance of Robert F. Kennedy (well played by character Jack Holmes) in Delano, California to support Cesar Chavez and his union’s strike against grape farms achieves the desired impact. The scenes of Robert Kennedy speaking up on behalf of farm workers is a poignant reminder to modern moviegoers that America once had a liberal left with plenty of gas in the tank.

“Cesar Chavez” is far from being a perfect movie. Its small budget is apparent, and the film’s dramatic arc doesn’t extend as high as it might. Be that as it may, the movie reaches its goal of reminding audiences how far migrant workers have come in America since the ‘60s, and how far they have yet to go toward better working conditions and higher pay. It only takes a pinprick to burst open floodgates of public consciousness. The spirit of Cesar Chavez lives on.

Listed below are links to weblogs that reference CESAR CHAVEZ: