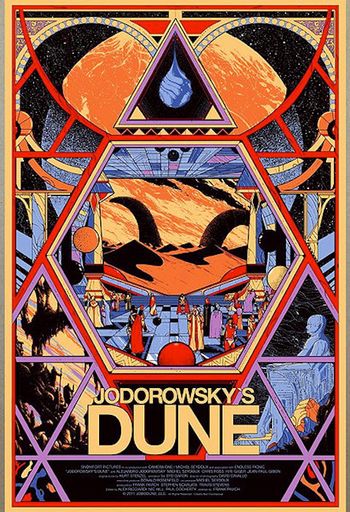 Alejandro Jodorowsky is much more than a mad genius of cinema. The Chilean-born artist/filmmaker who created “El Topo,” the experimental surrealist film that started the Midnight Movie craze in 1970, has lived a life full of such enthusiastic artistic creation that his very existence defies all expectation. Apart from creating some of the most transgressive films ever made (see “Holy Mountain” and “Santa Sangre”), he has directed over 100 plays and written more than a hundred books, plays, and comic books.

“Jodo,” as his friends call him, developed his own form of tarot-derived therapy entitled “psychomagic,” after the death of his third son Teo at the age of 24, in order to “heal psychological wounds suffered in life.” At 85, Jodorowsky has the energy and drive of a young man. He wants to live to be 300. A more articulate and forceful mind, you are not likely to find. You would have to combine Werner Herzog, Klaus Kinski, and Paul Verhoeven into the same person to even get close.

It will come as a great surprise to many avid filmgoers that before David Lynch directed the cinematic abomination “Dune” in 1984, it was Alejandro Jodorowsky who was originally slated to make the film version of Frank Herbert’s celebrated science fiction novel. Having made a million — ‘70s-era — dollars on “El Topo,” and having received global critical praise, Jodorowsky had carte blanche to tackle any project he wanted. Based on a friend’s glowing impression of “Dune,” Jodorowsky chose his next movie without even reading the book. He set about putting together the most talented production designers, artists, musicians, and actors he could find. Jodorowsky spent the next two years storyboarding the entire film frame-for-frame.

Documentarian Frank Pavich struck cinematic gold when he got the blessing from Jodorowsky and “Dune’s” former producer Michel Seydoux to make a movie about Jodorowsky’s journey to make the film. Here is the alternate history of two doomed films — the awful one released to audiences and the brilliant one that was never made.

An interview clip with Nicolas Winding Refn finds the Danish enfant terrible director of “Drive” telling about an evening that he and his wife spent with Jodorowsky in his home. After dinner, Jodo took out a large thick book that contained concept sketches, color design-drawings of costumes, spaceships, and pencil-sketched storyboards for every single frame of the film that Jodorowsky never made. Refn describes the personalized experience of “seeing Dune” through Jodorowsky’s book-assisted verbal explanation as “awesome.”

Like Refn, the audience is shepherded though Jodorowsky’s “Dune” via the director’s exuberant descriptions, given during animated interview sessions — set mainly inside his Parisian apartment. The white-haired Jodo switches between French, Spanish, and English as he displays his copy of the legendary, all but priceless, “Dune book” — copies of which were given to the heads of every major American film studio in a pitch-effort to obtain the missing $5 million necessary to meet the film’s projected $15 million budget that would allow for American distribution.

Jodorowsky commissioned the French graphic novelist Moebius (a.k.a. Jean Giraud) to draw the film’s storyboards, which Pavich utilizes in close-up to take place the viewer in a full-screen version of how the film would have looked. The effect is convincing.

Interview clips with Moebius describe the close friendship he developed with Jodorowsky that gave free-reign to his artistic imaginings. Screenwriter Dan O’Bannon (“Alien”), H.R. Giger, and Jodorowsky all comment on Moebius’s incredible speed at drawing renderings of the filmmaker’s vision.

Tales of Jodorowsky convincing David Carradine, Mick Jagger, Udo Kier, Orson Welles, and a haughty Salvador Dali to act in the film, give credence to the director’s sensitive gift of charm to tame even the most outrageous personalities.

This documentary’s hook lies in the incontestable influence that Jodorowsky’s book version of Dune had on so many films that followed — the most obvious of which is “Alien.” Although Jodorowsky was never able to bring his ambitious vision to fruition, seeds of his and his artist’s ideas continue to bloom. “Jodorowsky’s Dune” is the closest any audience can come to experiencing that vision, and a damned impressive adventure it is.

Listed below are links to weblogs that reference JODOROWSKY'S DUNE: