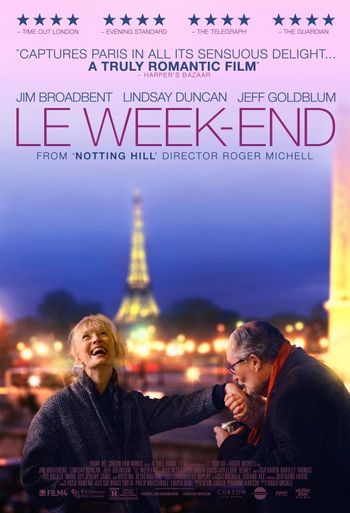 Audiences familiar with screenwriter Hanif Kureishi’s work — reference “My Beautiful Laundrette” and “Sammy and Rosie Get Laid” — will want to seek out the author’s latest collaboration with director Roger Michell (“Venus”). They will not be disappointed. Revisiting their honeymoon in Paris, 30 years later, an elderly married couple — played by stars of British stage-and-television Jim Broadbent and Lindsay Duncan — enjoy a frustrating, romantic, bitey, and emotionally challenging experience that eventually lands them on equal footing.

Broadbent and Duncan play the sixty-something Nick and Meg Burrows with a full range of emotional and intellectual colors that express their struggles as British teachers whose careers have not panned out as they imagined. Nick has just been given walking papers from his tenured professorship at a respected university for some offhand advice he gave to a student. The times have changed. As always, Kureishi keeps his finger on the pulse of generational shifts occurring beneath the feet of his characters, who have to choose whether to stumble, dance, or fall. In Hanif Kureishi’s universe, all foibles are equally lovable.

The quaint hotel Nick and Meg booked isn’t up to Meg’s standards. Their tiny room is notably “beige,” an atmospheric deal-breaker for Meg. Tight personal finances don’t prevent Meg from splurging now that the couple is free of their gloomy UK existence, and their adult son has finally flown the coup. An expensive sightseeing taxi tour around Paris leads the couple to a five-star hotel where they run up an enormous bill while acting like teenagers whenever the mood strikes.

Running out on an expensive restaurant tab presents a challenging adventure — especially for Meg, who is hell-bent to sew at least a few wild oats while basking in the glow of the City of Light. Nick would just as soon settle for a little romp between the sheets with his wife. But Meg is not as amorously inspired, at least not toward her husband, even when he dutifully tries a bit of fetishistic worship.

Jeff Goldblum all but steals the movie as Morgan, an expat former classmate of Nick’s from their days at Cambridge together. Morgan is everything Nick isn’t — notably, a successful writer with a much younger wife. Goldblum’s hyper-intellectual character is so full of himself that you half-expect him to start swinging from lampposts. Morgan’s energetic influence is inciting if not entirely infectious.

The poignant nature of Nick’s late-life-crisis comes to a boil during a party at Morgan’s well-appointed apartment over dinner where Morgan’s ignored teenaged son (Olly Alexander) is in attendance. Nick delivers a devastating monologue about his dire state of being at the dinner table. He speaks some harsh truths on behalf of several generations regarding the 21st century atmosphere of ineffable bleakness. The brilliantly written dialogue stings and soars. Nick is a man of substance and power after all.

“Le Week-End” articulates a nostalgic sense of romantic aspiration without ever giving in to sentiment. Sophisticated, yet pitched in a lighthearted tone, the film packs more thematic heft than it discloses on face value. Comedy and tragedy wear the same mask in the city that best represents romantic love. Just as with Paris, you’ll want to revisit “Le Week-End.”

Listed below are links to weblogs that reference LE WEEK-END: