The Vampire-Alien Who Fell to Earth
Scarlett Johansson Goes Undercover 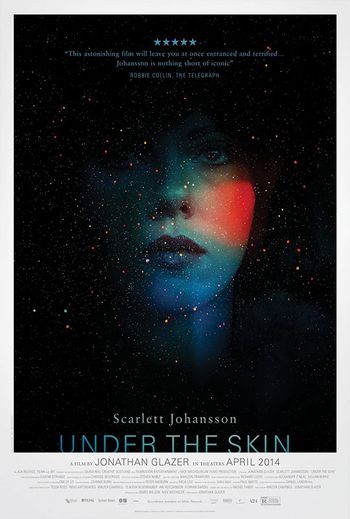 More visually accomplished than its malnourished narrative deserves, “Under the Skin” works well as a foxy sci-fi movie for stoners. It would look great projected on a giant screen at a rave for drugged-up youth to have something to glance up at while dancing to monotonous drum-machine rhythms provided by a robotic DJ — preferably female. Between Scarlet Johansson’s vampire-alien character Laura and truly impressive production design, the movie is gorgeous to look at even though it doesn’t hold up under any degree of thematic scrutiny. This movie is all aesthetics, but not much else.

Based loosely on Michael Faber’s 2001 novel, this specious work is director Jonathan Glazer’s attempt to make good on a once-promising career that began with such critically vaunted pictures as “Sexy Beast” (2000) and “Birth” (2004). Sadly, Glazer has no such luck here.

Cribbing copiously from such directors as Hitchcock, Roeg, and Kubrick, cinematographer Daniel Landin (“44 Inch Chest”) has a field day exploring dark shimmering surfaces in contrasting color schemes. Landin is the film’s greatest revelation. If there is any justice in this world, his work here ought to lead to higher budget sci-fi films.

Landin’s film-opening alien-eyeball sequence dandles with ocular imagery to introduce Laura as an artificial humanoid coming to life. Where Hitchcock showed a bathtub drain morphing into a pupil to unveil Marion Crane’s dark passage to extinction, Landin reverses the process.

Laura’s soulless oil-black figure slips into the skin of a human female like a ballerina putting on a leotard. She practices a British accent that will allow her entree into the human world via Scotland, where her sensual beauty serves as a honey trap for unwitting males who tumble like lemmings into the sea. Ignoring the “too-good-to-be-true” adage proves fatal to Laura’s rough-and-randy suitors whom she entices into a bizarre dimension. Here, they drown one by one in an inky black sea of acquiescent lust-crazed ambition. If the filmmakers are attempting to make a thematic analogy regarding man’s greedy quest to profit from oil, the effort is too undefined to achieve the desired effect.

Where David Bowie’s alien character in “The Man Who Fell to Earth” had a clear agenda of creating and financing a system for transporting water back to his dying planet, Laura is seemingly in it for the experience of seducing easy-target males whose BS-detectors are broken; not much challenge there. What we end up with is a movie with no super-objective, but plenty of abstraction for its own sake.

For Laura’s streetwalker conquests, the filmmakers used a system of tiny hidden-cameras to surreptitiously capture the action without the knowledge of the non-actors who were later asked to sign releases for their sequences to be used in the film. The gimmick works better if the audience knows about the deception going in. Even then, the fly-on-the-wall conceit adds up to little more than a guilty-pleasure for in-the-know filmgoers to have some subtext, however minimal, to hang their viewing experience on.

“Under the Skin’s” failure rests as much on its lack of an empathetic protagonist, as it does on its absence of meaning. Scarlett Johansson makes for one attractive hot-and-cold alien ice queen, but seduction and murder is all the scriptwriter allows her to have on her mind.

Listed below are links to weblogs that reference UNDER THE SKIN: