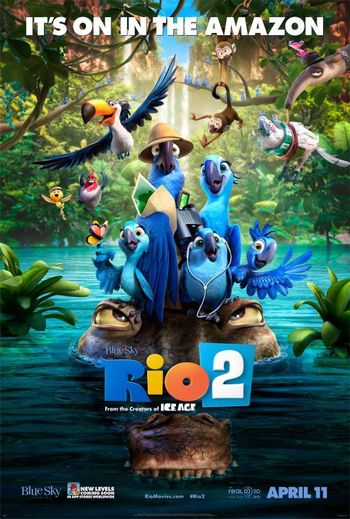 Brazilian co-writer/director Carlos Saldanha returns to the music-driven children’s animation franchise he began in 2011. Written alongside three other screenwriters, “Rio 2’s” skewed racial hierarchy of animal characters is spelled out beneath their colorful camouflage. The filmmakers’ offensive agenda of international hegemony, however wrapped up in a ruse of ecological activism, is hard to miss.

At the bottom of the film’s social pecking order is Tracy Morgan’s slobber-dripping bulldog Luiz. The drooling canine character is so disgusting, you can’t wait for the scene to change so you don’t have to look at him anymore.

Jamie Foxx and Black Eyed Peas singer will.i.am occupy this society’s second rung from the bottom to support this troubled film’s marginalization of blacks. They voice a “super-mega-dope” rap-singing duo that provides the movie with snarky comic asides. Jamie Foxx’s bottle-cap-hatted canary Nico says, “Ama-what?” — in response to the word Amazon. Think of it as endorsed ignorance for the pro-ebonics set. 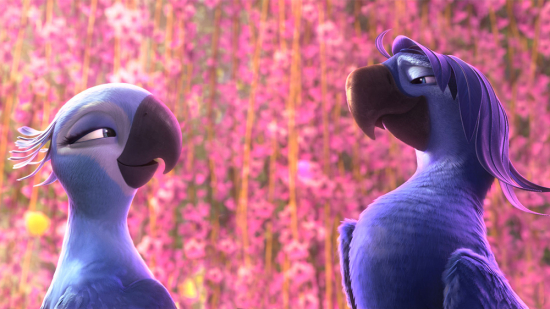 Such heavy-handed use of racial stereotypes has been common in Hollywood’s animated films dating back even before 1941, when Disney’s use of dark-skinned crows in “Dumbo” made an obvious editorial commentary about blacks.

The film’s white = top / black = bottom simile is oddly reinforced with a pro-ecology subplot that gives the story its bulldozer-filled conclusion in the middle of the Amazon jungle. The lumber laborers are dark-skinned men with chainsaws and bulldozers. The film’s most ferocious villains are dark-skinned brutes, drawn in a more naturalistic style than the film’s other characters. 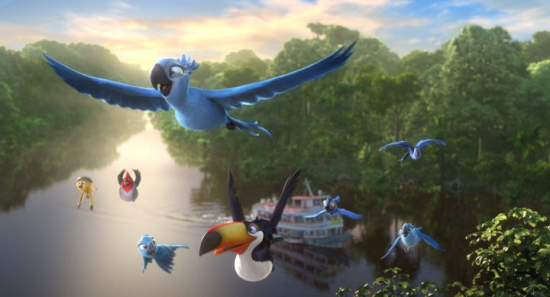 Jesse Eisenberg and Anne Hathaway do Jewish-and-gentile voiceover duties as Blu and Jewel, a pair of rare blue macaws from Brazil; no need for Portuguese-descent actors here. Eisenberg’s miscasting comes into higher relief this time around. An opening musical sequence exposes the actor’s lack of singing ability to a painful degree. Hathaway’s proven singing skills are on display, although the tunes themselves rarely connect to the story in an organic way as occurred in “Rio”-one. The energy and content of the songs seldom matches up with the dialogue or storyline.

A television report about Blu’s former owner Linda (Leslie Mann) and her naturalist husband Tulio (Rodrigo Santoro) alerts Blu and Jewel to the presence of other blue macaws in the Amazon forest. Anxious for their three children Carla, Tiago, and Bia to learn about survival in the jungle, Jewel requests the family pick up and moves out of the city to the Amazon. Reuniting with her long-lost dad seals Jewel’s desire to stay in the jungle rather than return to the city. However, Brazil’s lumber industry is in the process of tearing down the jungle.

Between the film’s white-world-order depiction of a multicultural society and its ham-fisted treatment of an ostensibly pro-ecology agenda, “Rio 2” is a confused piece of animation propaganda. Its ideological disorientation contributes to the unsettled sense that the movie leaves with its audience. It might be pretty to look at, and the music might be perky enough, but “Rio 2” gets lost in its own jungle.