« THE DANCE OF REALITY | Main | EDGE OF TOMORROW »

A MILLION WAYS TO DIE IN THE WEST 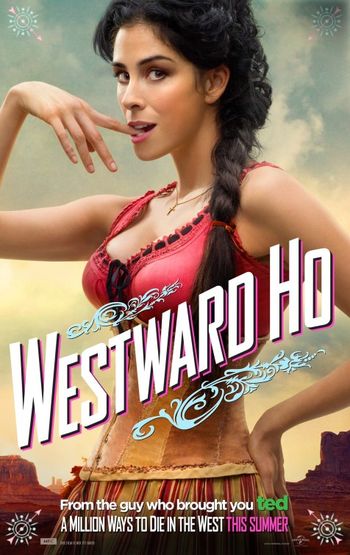 Of the hundred or so gags, jokes, and one-liners that comic genius Seth MacFarlane throws at the wall over the course of this bawdy and sometimes grotesque Western comedy, nearly half of them connect with a funny bone. It’s not a great ratio of wins to losses, but in the realm of Hollywood comedies it’s better than average.

Co-writer/director/actor MacFarlane’s scattershot approach could have been better applied had he built more on the traditional template of the Western genre with a view toward creating a cohesive narrative foundation for his outré wisecracks to bounce. Also, tighter editing would have made for a funnier movie. The film’s romantic storyline (circa 1882), about a cowboy winning back the woman who left him for another man, doesn’t begin to support its nearly two-hour running time. “Blazing Saddles” this isn’t. MacFarlane leans on a tell-don’t-show method that doesn’t take advantage of the film’s iconic Monument Valley, Arizona setting. We don’t even get a quicksand scene.

MacFarlane’s biggest oversight lies in casting himself as the film’s comic leading character Albert, a fish-out-of-water if ever there was one. Arthur lives at home with his flatulent father and barely glimpsed mom. He’s an unskilled sheep farmer who dreams of leaving the frontier life behind. MacFarlane doesn’t know whether to play Arthur as a straight man or a funny guy, so he ends up doing dual-duties — a big no-no. With his manscaped eyebrows and perfectly coiffed hair, MacFarlane’s Arthur comes across as more of a mannequin-vessel for the actor’s radio-quality voice than a jester of dubious intent. MacFarlane doesn’t bother to create a character for Arthur; instead, he narrates and performs actions as a casual version of himself. Had he applied some comic make-up and invented an eccentric personality — as Neil Patrick Harris does with his show-stealing performance as Foy, a mustachioed womanizer — MacFarlane might have struck comic gold. Considering the broad range of characters MacFarlane created for his adult animated sitcom “Family Guy,” it’s surprising that he didn’t choose to do it here. Casting a brilliant monomaniac like Tom Green as Arthur might have worked.

The filmmaker commits yet another blunder in making Arthur’s sidekick character Edward (Giovanni Ribisi) an even paler (read weak-willed Caucasian) version of Arthur. The effect is one of redundancy rather than resonance. Had Edward’s character been written for — let’s say — Dave Chappelle, the humor could have had some distance to zip and fly. Here’s a Western comedy desperately in need of some minority representation. Apart from an extended sequence involving a tribe of American Indians, MacFarlane’s version of the Old West is a strictly white affair.

As a writer, Seth MacFarlane has a knack for ribald rapid-fire dialogue and twisted comic set pieces. Arthur’s beautifully dry monologue about various and sundry ways that the Wild West is out to kill its inhabitants is truly inspired. Angry drunk people, hungry animals, outlaws, and even the local doctor, all carry an equally lethal potential to bring an end to one’s existence. The sudden death of a man unloading a giant block of ice will snap you out of your chair with queasy laughter.

Sarah Silverman does a lot with the too few scenes she’s given as Ruth, an accommodating Christian saloon-prostitute who withholds sex from her virginal boyfriend (Ribisi). Charlize Theron keeps the movie ticking as Anna, the wife of Clinch, a ruthless outlaw (played by Liam Neeson). While Clinch is off doing who-knows-what, Anna swoops in on Arthur to teach him a few lessons about how to shoot straight and mend his broken heart.

There is no denying Seth MacFarlane’s many gifts for humor. But as a director and as an actor, he still has lessons to learn.

Listed below are links to weblogs that reference A MILLION WAYS TO DIE IN THE WEST: