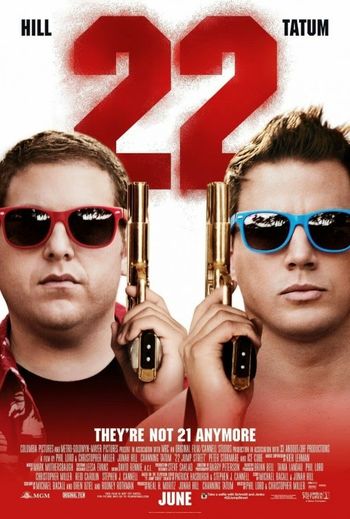 Everything about the concept of a “Jump Street” franchise reeks of Hollywood’s perpetual drive to repackage a formula and call it a movie. 2014 has been an abysmal year for Hollywood movies — bottom-line grosses notwithstanding — and the near future looks just as bleak.
On its face, “22 Jump Street” is an overt insult to its audience. The returning filmmakers (directors Phil Lord and Christopher Miller of “The Lego Movie”) have the audacity to flagrantly announce to their audience via dialogue that this sequel’s plot is identical to the two-year-old “21 Jump Street.” Such proud self-referential displays of inanity have become acceptable to the same generation that “22 Jump Street” is aimed at. If you’re not a member of its born-after-1985 target audience, there’s no room for you at the table…and you're lucky not to be invited.

The filmmakers could at least have had the decency to create a new MacGuffin. No such luck. The only difference this time around is that our thirtysomething cop-duo goes undercover at a college rather than at a high school. It’s all about locating the head of a drug ring — which may or may not be operated by a student named Zook, who also happens to be a hotshot quarterback on the college football team and president of an elite fraternity.

The new drug (known as WHYPHY — get it, wi-fi?) is a killer. Evidently, the idea of “mixing Adderall with Ecstasy” was on some screenwriter’s agenda for sparking conversation about drug-sales on college campuses. The school’s upcoming Spring Break, in “Puerto Mexico,” promises to see a profusion of WHYPHY, hence the dunderheaded investigation underway.

It’s not so cool to be a bro in love with your bro. Jealousies can arise. So it is that the ever-deepening bromance between Johan Hill’s agent Schmidt and Channing Tatum’s officer Jenko hits a few snags. Jenko falls in manlove with Zook. The feeling is mutual. The dryly-phrased physical-but-ostensibly-asexual nature of the pair’s affection flirts with a put-on mockery of gay romance. A question about whether Schmidt and Jenko could ever get around to doing the nasty is out of the question; they are merely heterosexual males in touch with their feelings in a mainline corporate 2014 way. Even their alter-ego undercover identity is that of familial brothers Brad and Doug McQuaid. Still, you get the idea that Jenko’s romance with Zook could go another way.

Disjointed comic sequences — one involves a therapy session with Schmidt and Jenko or a “Mr. and Mrs. Smith”-styled seduction fistfight between Schmidt and his girlfriend’s homely roommate — give a sense of the one-trick plot devices being stuck together without regard to any storyline. Gags like Jenko grabbing Schmidt’s wang instead of a hand grenade while the men hang from a helicopter aren’t as funny in application as they must have seemed to the film’s trio of screenwriters. Though, really, they shouldn't have then.

In light of America’s epidemic of mass shootings, “22 Jump Street’s” cavalier attitude to throwaway gun violence calls attention to itself. Hollywood is currently doing everything wrong. How long will it be before they start doing something right?

In light of America’s epidemic of mass shootings “22 Jump Street’s” cavalier attitude to throwaway gun violence calls attention to itself. Hollywood is currently doing everything wrong. How long will it be before they start doing something right?

Listed below are links to weblogs that reference 22 JUMP STREET: