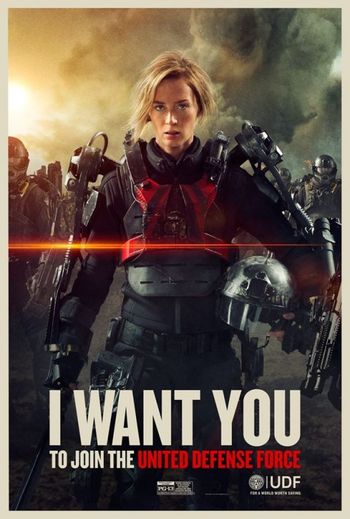 High-concept, but offering only minimal entertainment value by way of its stale ghost-in-the-machine storyline, “Edge of Tomorrow” is the “Groundhog Day” of sci-fi movies. Based on a Japanese novel (“All You Need is Kill”), the film’s main gimmick is a time-looping narrative that encourages a good deal of laziness by its three screenwriters. You guessed it; the film’s two warrior protagonists keep getting killed before returning to live out the same ill-fated day. The trick is, they get to warm up for each big day in between. Director Doug Liman (famous for his work on the Matt Damon-“Bourne” franchise) whips up an underwhelming ride at which young moviegoers are expected to goggle.

Tom Cruise plays Major William Cage, a scaredy-cat public relations flack for the U.S. military who can’t stand the sight of blood. An alien space invasion of multi-tentacled warriors — known as Mimics — prompts the sending of Cage to the European frontline where America’s United Defense Force is fighting a losing battle against a mighty army of fast-twitch metal monsters. For the first ten minutes, Tom Cruise has fun playing Cage as a spineless tool. Cruise isn’t above poking fun at himself, and it works well for the movie – though only briefly. It only takes a few more minutes for Cage to transform from sissy-nerd to badass.

Major Cage might have avoided his excruciating wartime fate had he not tried to blackmail the four-star general (Brendan Gleeson) calling the shots. It defies logic, however, that a 51-year-old man — even of Tom Cruise’s physique — would be called up to fight as a soldier in a hyper-fast version of D-Day where no humans survive, though two humans reincarnate on a daily basis.

Emily Blunt’s Special Forces ass-kicker Sgt. Rita Vrataski is a commando with her own tagline; it reads, “Full Metal Bitch” on billboard ads. Here is Jean d’Arc for the 21st century. Emily Blunt’s sexy tomboy incarnation of a modern day Warrior Queen is one hot baby. Her signature weapon is a gigantic machete-like sword that speaks truth to power. Rita beats Cage to the punch of some transmogrifying alien goop, which allows them each to reincarnate on a daily basis for the purpose of saving the planet. The aliens are playing God on a couple of personal levels; alas, the filmmakers don’t bother to explore the implications. For all of the threat the aliens pose to humanity, the creatures get no editorial voice. It’s like having mute Klingons. What would be the point?

The just-a-wee-bit-sexist screenwriters insist upon a bait and switch that allows Cage to quietly steal Rita’s conqueror-champion thunder. Sgt. Rita Vrataski needs a better publicist. The filmmakers hardly bother to deliver on the narrative offer promised by the billboards that only seem to foreshadow significant story development for Sgt. Vrataski beyond the tacit love bond she finds with Cage.

Even with the aid of a tricked-out mechanized weapons suit, Private Cage dies on his first mission, after getting a look at Sgt. Vrataski’s imposing battlefield skills. Shockingly, Cage snaps right back to life after having his face melted off by alien blood goop. Rita trains Cage in defense and offense techniques in order to help them escape from a battle that they soon come to know like the backs of their hands. Rita and Cage keep dying and returning to their first day of battle, until they can survive long enough to locate and destroy the much-discussed “Omega” — the aliens’ hidden power-mind, which must be annihilated for humanity to survive. Cue the sad trombone.

The first few times Cage returns to meeting and greeting his troop, and going out on their doomed mission, it’s fun for the audience. But the sequence gets old quick. Cage alters his behavior in slight ways as he evolves into a super-soldier male version of Rita. The repeated set-ups and dialogue are humorous in a bland way, one that makes you wish for a better story.

“Edge of Tomorrow” has no sense of the potential political satire it squanders, yet it does manage to tease up some much-needed brisk romance between the ever-reliable Blunt and actor-machine Tom Cruise. The filmmakers busily mask plot holes by selectively — but implausibly — withholding knowledge that Cage inexplicably retains, but Rita does not, regarding their many shared reborn days together. Their overlapping time-loop vignettes don’t coalesce or gain momentum. Everything gets sloppy. The screenwriters snooze, failing to develop the most important thread of the movie. The film’s permutating storyline is hardly worth the trouble as it grudgingly leads up to an insignificant climax that leaves you glad Emily Blunt was in the movie, but not much else.

Listed below are links to weblogs that reference EDGE OF TOMORROW: