A MOST WANTED MAN 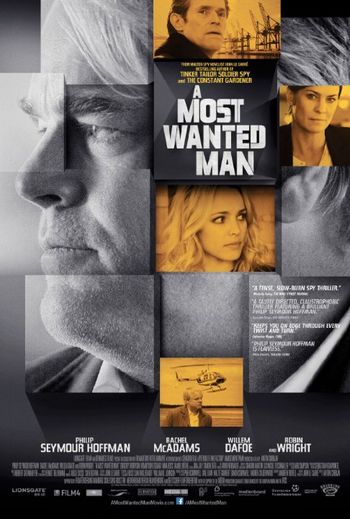 Anton Corbjin’s unconventional post-9/11 spy thriller (based on a 2008 John le Carré novel) remains an engaging experience despite numerous aspects that weigh it down. Notably, one of Philip Seymour Hoffman’s last performances — here as a German spook — arrives with the bittersweet realization that the late actor was no longer in full command of his acting skills when the film was made.

Hoffman plays Günther Bachmann, the acting head of an elite government-controlled anti-terror spy unit based in Hamburg. Given his previous performances, Hoffman’s waning German accent and distracted delivery is at times painful to witness. Still, this naturally gifted actor keeps it together enough to support the slow-simmering storyline around him.

The film’s lack of a clear protagonist, much less a viable antagonist, proves to be its biggest stumbling block. The screenwriter (Andrew Bovel) didn’t effectively adapt le Carré’s book to\ proper script form. Nonetheless, Anton Corbjin’s experience as a still photographer — his black-and-white photos of rock stars were featured prominently in New Musical Express for years — contributes greatly to sustaining suspense. Corbijn’s appropriately formal compositions and fluid camerawork evoke a calculated coldness germane to the nature of espionage to keep the audience hooked up until the film’s climatic revelation.

The modern day narrative begins with the arrival in Hamburg of an undocumented Chechen immigrant. With a scruffy beard and hooded head, the 26-year-old Issa Karpov (Grigoriy Dobrygin) appears from the outside to be a made-to-order Islamist terrorist. Add to Issa’s menacing appearance the fact that he spent the last dozen or so years imprisoned and tortured in Russian and Turkish prisons, and you have the perfect recipe for a radicalized personality ready to snap.

Ironically, it’s Issa Karpov’s possible access to his deceased father’s fortune that facilitates his greatest threat to the Western world. Issa’s old man was a hired assassin in thick with the head of one of Germany’s most powerful private banks. Issa has a letter from his father, and a banking “instrument,” that promises to provide him with tens of millions of Euros if the bank will honor his claim. Issa wants to give the money to Muslim “charities” — code for “terrorist” organizations.

After securing lodging with a Turkish family, Issa receives much-needed assistance from Annabel Richter (Rachel McAdams), a naïve attorney for a human rights organization. Annabel is out of her depth, and soon becomes co-opted by Günther Bachmann’s time-sensitive operation to cooperate with surveilling the “most wanted” man — a man she genuinely wants to protect.

“A Most Wanted Man” is a dense think piece about the scale, scope, and ethically dubious practices of the American government’s intelligence operations abroad — specifically in Germany.

Written before Edward Snowden’s ongoing disclosures of NSA documents and inspired by the pre-9/11 "Hamburg Cell," the film is hamstrung by being too far behind the times. Martha Sullivan (Robyn Wright) is a high-ranking CIA spy adept at playing all the angles to get what she wants regardless of what bridges she burns. Wright’s ruthless character seems to have much in common with the two US spies recently expelled from Germany for just such practices. Germany may well be asking itself, who needs enemies with these kinds of allies around?

Posted by Cole Smithey at 04:07:01 PM in Action/Drama, Spy Thriller