« MAGIC IN THE MOONLIGHT | Main | THE HUNDRED-FOOT JOURNEY » 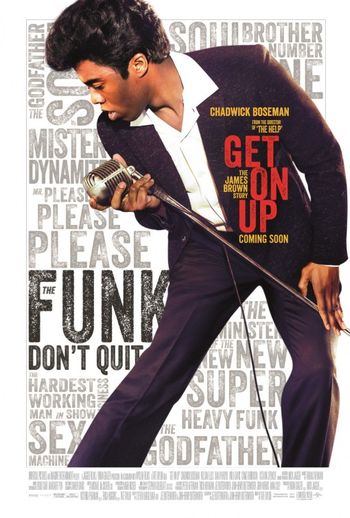 Between Chadwick Boseman’s riveting portrayal of James Brown and this film’s pitch-perfect kaleidoscopic narrative form, “Get On Up” is the kind of musical biopic that audiences await with bated breath. Aside from being the first truly respectable movie to come out of Hollywood this year, “Get On Up” gives voice to the varied struggles that James Brown overcame on his way to becoming the “hardest working man in show-biz.” Evidence that it was always “the singer, not the song,” the film brilliantly shows off James Brown’s charisma and infectious energy while also providing glimpses of his notorious temper — which found lightening rods in his wife and band members. Although the film’s committee of screenwriters are careful not to show more than a few of Brown’s angry outbursts for fear of alienating audiences, they convey the gist of his volatile personality.

The hazard of biopics rests with how a subject’s life story is compressed, ordered, and told. Filmic biographies of musicians pose special problems because the audience has to buy the actor standing in for the musically gifted performer whose life comes under the camera’s microscopic lens. To this end, Chadwick Boseman’s transformation into the man who introduced funk to white audiences is unassailable. Boseman tackles Brown’s vigorous dance moves with complete authority. His embodiment of James Brown from age 16 to 60 is nothing short of phenomenal. Boseman’s portrayal of Jackie Robinson in last year’s “42” was impressive, but his work here as James Brown reveals a young actor in complete command of his craft.

Arriving on the heels of Jon Brewer’s essential documentary “BB King: The Life of Riley,” similarities between the childhoods of King and Brown come to the fore. Both were left to fend for themselves as boys and each transferred their love of gospel music into a personalized blues form that skyrocketed them to fame and fortune beyond the chitlin circuit famous for exploiting the musicians that played its Southern roadhouse route.

Rural scenes in South Carolina of the only-child James living in a shack with an abusive alcoholic father and a desperate mother set the stage for the singer’s rebelliousness to flourish after escaping his parents’ deforming clutches. Stealing a suit from a car seat costs James a few years in the pokey, where he meets gospel singer Bobby Byrd (unforgettably played by Nelsan Ellis). Once out of jail, the two men team up to form The Fabulous Flames — a short-lived band that launches James Brown as a star singer and bandleader.

It’s after the Fabulous Flames’ foray into popular blues territory with a rocking version of Louis Jordan’s “Caldonia,” following a performance by Little Richard, that the movie delivers one of its best scenes. Outside the diner where Little Richard (Brandon Smith) slings burgers, he generously gives James advice about how to make an acetate and grease the palms of DJs to give his cuts precious airplay. For an instant we are transported back to the exact moment when the lights went on in James Brown’s head regarding his career, thanks to his latest fan, Little Richard.

Other subplots don’t go so well. Dan Aykroyd’s cheerleading portrayal of James Brown’s manager Ben Bart is sugary to a fault — so much so that a crucial scene where James all but takes Bart’s management duties away from him comes and goes like a gentle breeze. I doubt the discussion was so gentile when James Brown pulled the coup on Ben Bart in real life.

Director Tate Taylor (“The Help”) sugarcoats, or more accurately neuters, as dictated by the play-it-safe script — we barely get a sense of Brown’s problems with drug and alcohol abuse, or his financial disasters (which are only alluded to during a band mutiny at a recording session). 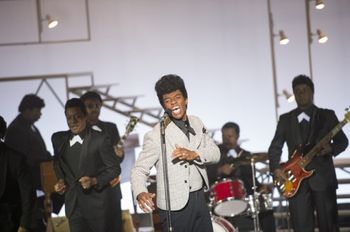 Still, the film takes flight is during its many stage performances of such James Brown barnburners as “Please Please Please,” “Papa’s Got a Brand New Bag,” “and “Get Up Offa That Thing.” Co-produced by Mick Jagger, the film’s lively performance sequences are backed by a combination of James Brown recordings (taken from live and studio tracks). The effect is that of hearing and seeing James Brown and his famously tight band delivering the hottest funk on the planet.

There are plenty bones to pick regarding James Brown’s legend in “Get on Up.” But the music effectively drowns out such hair-splitting. Whether or not you are a fan of James Brown, you’ve got to see what Chadwick Boseman does in filling the performer’s mythic shoes.

Listed below are links to weblogs that reference GET ON UP: