Frank Miller’s Sin City: A Dame to Kill For

Black, White, and Red
Greed, Lust, and Violence Do It Again for Frank Miller and Robert Rodriquez 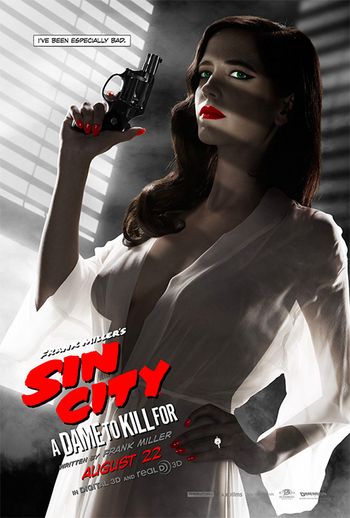 Oozing with more hard-boiled wit than a dozen Dashiell Hammett novels and more visually compelling than every comic book movie Hollywood has put out in the past three years combined, “Frank Miller’s Sin City: A Dame to Kill For” is an action-packed feast. Graphic novelist Frank Miller once again shares directing credit with Robert Rodriguez in creating a sequel that is every bit as narratively gripping and visually stunning as their original “Sin City” (2005).

Though its perfunctory 3D treatment leaves much to be desired, the film’s noir atmosphere is beautifully lush. Ink-dark blacks reflect against stark whites to give Sin City and its bold characters a place for their many gray shades of seething violence and sex to exist. Precisely situated splashes of color emphasize the visual dynamic on display. A blue dress, emerald green eyes, and a candy-apple red convertible with fins conspire to set your imagination reeling.

Four intertwining tales of lust, revenge, corruption, and wanton violence play out with a gallows humor as razor-sharp as it is delightful for audiences attuned to the pitch. The movie is all about panache, and it has plenty to spare.

“I was born at night, but it wasn’t last night.” Joseph Gordon-Levitt’s character Johnny has the hardened perspective of a cardshark who never looses. Slot machines dump out their coins like vomiting drunks to Johnny after he insures his luck with a kiss on the coin from a girl he picks up for the night. Her blonde hair cuts across the black-and-white surroundings like a banana peel on asphalt. Johnny’s primary objective is to clean out Senator Roark (Powers Boothe) in a backroom poker game where he’s warned he’ll be torn apart. Johnny’s agenda to humiliate Roark by taking him to the cleaners at poker has a personal motivation. Roark is Johnny’s estranged father. No love-loss sits between them. Johnny may be smart, tough, and mean but Roark covers his bets with goons, guns, and [notably] pliers. Ouch. 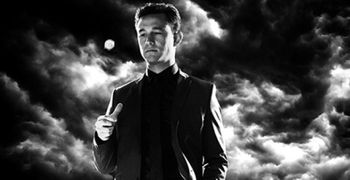 One-handed card shuffling is one of Johnny’s impressive tricks of his trade. The movie revels in details like these to give the audience little delights with every sequence. Still, Johnny bites off more than he can chew. It’s a dilemma that every character in the story suffers from at one time or more.

Blood spills like so much spilled milk — sometimes white, sometimes red, sometimes black, blood is the all-encompassing bodily fluid that connects the doomed citizens of Sin City. Miller and Rodriguez conspire to create a contained adult play land of sleaze and brutality where greed, lust, and revenge lead to spasmodic episodes of climatic eruptions. All lives are destroyed. All sins are paid. Sin City soils all those that live there. You know, it’s a place just like the one a lot of people are in; it’s called America.

Listed below are links to weblogs that reference Frank Miller’s Sin City: A Dame to Kill For :