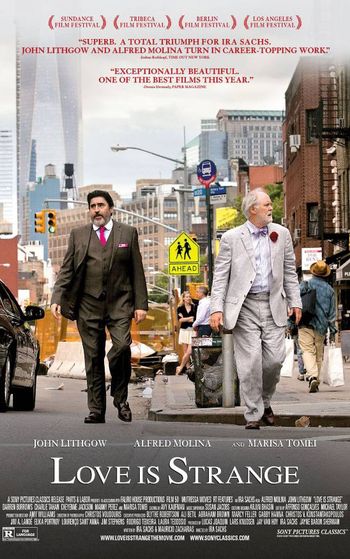 Though it suffers from a glaring third act jump that makes you wonder where four or five ostensibly missing scenes went, “Love Is Strange” resonates as a heartfelt allegory about committed gay relationships in modern-day America. Two of Broadway’s most reliable actors, John Lithgow and Alfred Molina as an elderly New York couple, capture the audience’s imagination before the movie starts.

Co-writer/director Ira Sachs builds upon the recent legalization of gay marriage to explore lingering, underlying hypocrisies that twist what should be an equalizing influence into a double-edged sword for gay couples who tie the knot.

“Society Is Mean” might be a more applicable title, for it is not the palpable human connection of tenderness that seems “strange,” but rather our culture of intolerance that comes across as bizarre.

Ben (Lithgow) and George (Molina) are like two gay uncles everyone wishes they had. They’ve been together for 40 years, living in a comfortable Manhattan apartment. Even if one member of the couple hasn’t always been monogamous — a fact referenced in one of the film’s beautifully intimate scenes between Ben and George — their desire and admiration for one another is sincere.

George teaches music at a Catholic prep school and gives private piano instruction to young would-be classical pianists. Chopin is in the repertoire, and throughout the soundtrack. Ben, the elder of the pair, paints.

Thanks to the endorsement of the State of New York, Ben and George get married in a small outdoor ceremony that introduces us to their loyal friends and family members. Sadly, the harmony of so much goodwill for these two rare men is soon broken by the archdiocese overseeing the school where George teaches. Without regard to how well George does his job, or how much his students love him, or even considering the fact that the school’s staff and pupils are familiar with his gayness; George is abruptly fired. The Catholic Church’s sucker-punch to George’s and Ben’s marriage and financial reality leaves them unable to keep their apartment, and their way of life.

Humbled but optimistic, the newlyweds are driven to ask friends and family to put them up until George finds a new job so the couple can find a new apartment. While George takes up residence with a gay couple of New York City police officers he calls “policewomen,” Ben is relegated to his nephew Elliot’s (Darren Burrows) top-floor apartment. It doesn’t take long for Ben to wear out his welcome with Elliot’s stay-at-home author wife Kate (Marisa Tomei) and their gawky teenage son Joey (Charlie Tahan).

Living apart from one another, however briefly, magnifies the malice inflicted on Ben and George by a Catholic Church that effectively trashes their life and speeds up their aging process. 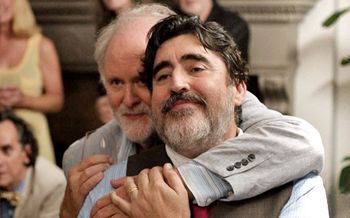 Love — in this case between two older men — is revealed as a defiant political act. Still, its fragile, personal nature means that the couple’s union has no traction in a society that treats something of such rarity with abuse and scorn.

“Love Is Strange” turns on Ben’s distantly positive influence on Joey, whose resentment toward his uncle morphs into an internalized sense of romantic hopefulness. But the question remains; how long will that precious attitude hold up in a society that values guns and money above all else?

Listed below are links to weblogs that reference LOVE IS STRANGE: