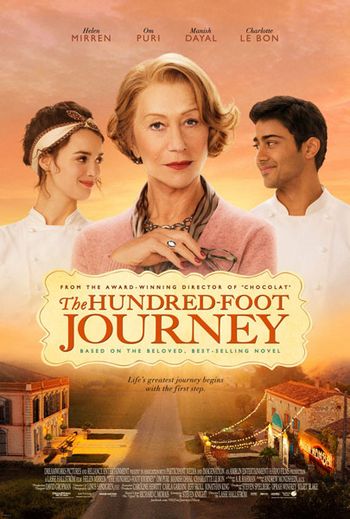 The foodie romance genre has been oddly absent from American cinema lately. It’s been five long years since "Julie & Julia" made audiences think about French cuisine vis a vis Julia Childs and a blogger on a mission to cook her way though Childs's first book. “Ratatouille” (2007) reminded audiences about their taste buds in an animated kids’ movie that arrived the same year that Catherine Zeta-Jones bumped uglies with Aaron Eckhart in a pleasing little food flick entitled “No Reservations.”

Any short list of foodie movies is sure contain Lasse Hallström’s charming filmic appetizer “Chocolat” (2000), in which Juliette Binoche and Johnny Depp awaken each other’s passions in a small French village where Binoche’s character opens a chocolate shop. Yum.

Returning to a provincial French location, Hallström’s second foray into the cinema-of-food effectively makes him an honorary chairman of the genre’s board of directors.

The director behind such food-tinged titles as “What’s Eating Gilbert Grape” and “The Cider House Rules” cut his teeth making music videos for ABBA in the ‘70s and ‘80s. Famous for his wonderful use of suffused lighting to evoke nostalgic moods (think “My Life as a Dog” or “An Unfinished Life”), Hallström presents beautiful compositions that lend themselves to mouth-watering depictions of cuisine — in this case, from India and France. Exotic spices from India do indeed harmonize with traditional French dishes on the screen. As the saying goes, “you can almost taste it.”

Even if its romantic tension gets muddled and the film’s pacing and editing go out the window in the third act, “The Hundred-Foot Journey” manages to connect its head, heart, and stomach via solid ensemble performances, led by reliable pros Helen Mirren and Om Puri. Still, lust gets short shrift amid a competition that develops between the story’s young pair of cooking lovers. 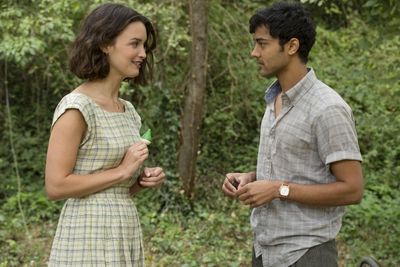 After escaping tragedy in Mumbai, Hassan Kadam (Manish Dayal) and his family realize their dream of recreating their deceased mother’s highly revered cooking. The family opens an Indian restaurant in a quaint French village — the kind you see on postcards. When it comes to preparing familiar or unacquainted dishes, Hassan is a natural in the kitchen.

French-local Marguerite earns a place in Hassan’s heart and stomach. Hassan wants Marguerite to teach him about French cuisine. It doesn’t hurt that newcomer Charlotte Le Bon has an adorable overbite and heartbreaking eyes. Marguerite’s cooking’s isn’t bad either, but she isn’t as skilled as Hassan at interpreting and elevating traditional dishes. Herein springs the chefs’ competition that variously derails the groovy attraction between Manish Dayal and Charlotte Le Bon — however compelling the couple is on screen together.

Both Dayal and Le Bon give inspired performances worthy of promising futures.

The allure between Marguerite and Hassan is further complicated by her employment as a sous-chef-in-training at the Michelin-awarded classic French cuisine restaurant that sits 100 feet across the road from Hassan’s festive Indian-themed place — as enhanced by loud traditional music and colorful lighting. 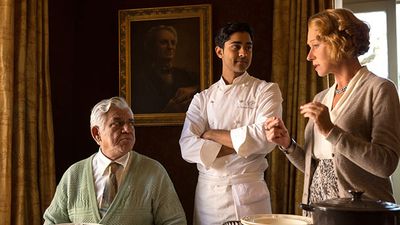 Helen Mirren’s Madame Mallory lords over her restaurant’s coveted two Michelin stars as though they were her children. Everyday in her kitchen is a learning clinic for her more than willing staff. The imperious Lady Mallory takes umbrage toward the rival restaurant’s threat to her closely guarded establishment. She sabotages the Kadam family’s restaurant with a multi-pronged attack. She’s not above buying up all the stock of certain foods from the local farmers’ market or filing nuisance complaints with the town mayor. The clash of cultures, combined with the threat of economic loss, incites one of Madame Mallory’s loyal chefs to commit a racist act of violence against the Kadams. However, the plot movement doesn’t develop enough to support, or resolve, the politically and racially charged subplot as it unfolds. The movie temporarily gets out of its depth before snapping back into place. The third act is a mess, but that’s another story.

Screenwriter Steven Knight (“Dirty Pretty Things”) tries to do too much. He wants the film to be part cultural polemic, part foodie heaven, part romantic love story, and part family film. It’s not that any of these elements needed to be mutually exclusive, but that they should fulfill the demands of the foodie movie genre. 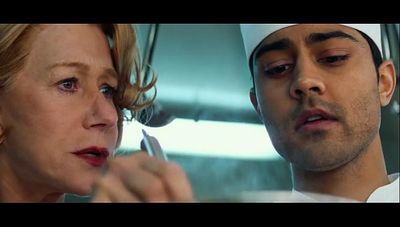 You’ll get a sensory charge from Lasse Hallström’s signature visual treatment of delicious plates, bowls, and pans of beautiful dishes made of fresh ingredients. Still, the film could have worked better if Knight would have stuck to a simpler formula. Romance, sex, and food go together like a knife, fork, and spoon. The author’s stretch to make a bland political statement, while conforming to the demands of a “PG-rating,” left no room for the “sex” part of the equation. For that kind of thing, check out Fina Torres’s “Woman on Top” (2000), starring Penélope Cruz as a Brazilian chef who moves to San Francisco. Hot, hot, hot.

Posted by Cole Smithey at 03:42:44 PM in Romantic Fantasy