THE TRIP TO ITALY 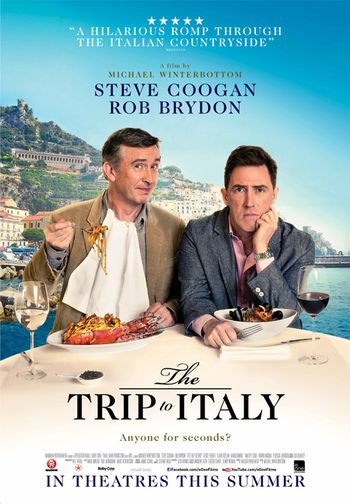 You couldn’t pick two more entertaining companions for a cinematic road trip in Italy than Steve Coogan and Rob Brydon. Following on the success of “The Trip” (2010), in which the duo went on a comic car tour of Northern England to sample its gastronomical delights, “The Trip to Italy” improves however slightly on the first film’s casual design.  A key difference rests with Steve Coogan's shift away from treating Brydon with any condescension, rather he seems to genuinely appreciate Brydon's gifts as a comic, and as a man.

Writer/director Michael Winterbottom (“24 Hour Party People”) returns to manage the shenanigans that Coogan and Brydon get up to while purportedly writing culinary articles for The Observer. Having rented a Mini Cooper — a reference to Peter Collinson’s original film version of “The Italian Job” (which featured Michael Caine in its leading role) — our free-associating duo sets out on a scenic tour of Italy, mapped by locations where the poets Percy Shelley and Lord Byron left their marks. Poetry of language is always on Coogan’s and Brydon’s minds, although more so on Brydon’s agenda. The duo’s itinerary takes them from northern Piemonte down to the Amalfi Coast with plenty of stops at distinguished restaurants along the way. However, Brydon's hopes of visiting Sicily — for obvious mafia related movie references — comes under attack from outside forces.

A stream of devilish details haunts the film’s waggish tone. Coogan has taken the liberty of disconnecting the car’s iPod jack to avoid listening to Brydon’s objectionable taste in music. Still, Brydon has a trick up his sleeve; he has with him one CD: Alanis Morissette’s “Jagged Little Pill” album from 1995. Two skilled British actors singing along in a Mini Cooper to Alanis Morissette is as funny as it sounds, which is to say pretty damned amusing. 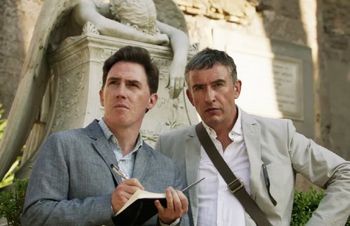 Watching Steve Coogan and Rob Brydon doing dueling impersonations of Michael Caine is a pure, simple pleasure that must be experienced. Where the first film was content to pepper lightly with just a few impersonation duels, this movie lets Coogan and Brydon go at it full-tilt in fancy restaurants where neither fellow patrons nor staff seem to mind the outbursts. Naturally, the actors’ contest turns to Caine’s performances as Batman’s butler. When the pair slip into an improv sketch involving an assistant director charged with telling Christian Bale and Tom Hardy not to mumble, the humor meter goes into the red. Brydon’s kneejerk habit of slipping into frequent spasms of Al Pacino impressions also never gets old.

For what is clearly a carefully thought-out script, “The Trip to Italy” has a remarkable naturalness to it. Lush Italian locations celebrated in films such as Ingrid Bergman’s “Voyage to Italy,” Humphrey Bogart’s “Beat the Devil,” and Jean Luc Goddard’s “Contempt,” come into play with a sense of appreciation for cinema history. Still, nothing is above making a joke about. Rob Brydon’s hysterical conversation with a lava-covered victim of the Pompeii volcano (kept in a glass coffin) dances on comic principals celebrated by the likes of Monty Python. Everywhere you look, history keeps rearing its inevitable head for Coogan or Brydon to tickle when they aren’t feasting on Italian food and wine. This is a vacation you’ll want to go on more than once.

Listed below are links to weblogs that reference THE TRIP TO ITALY: