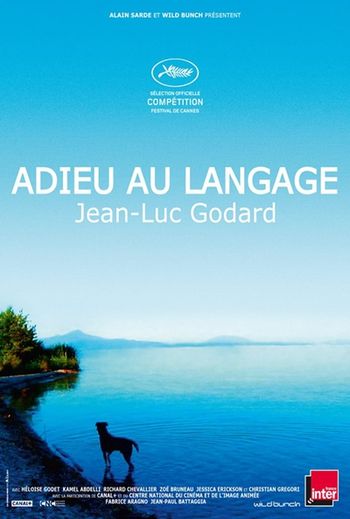 Leave it to Jean-Luc Godard, one of the originators of the Nouvelle Vague movement, to make a 3D movie that makes dramatic narrative use of the frequently misused technology to break the proscenium window. Hollywood could learn something from “Goodbye to Language” considering that it hasn’t “broken the window” on any of its 3D movies since “My Bloody Valentine” from 2009. When a woman washes her hands in a leaf-strewn fountain, her experience of dipping her hands into the crystal-clear water is more palpable than any filmic encounter you’ve ever had.

During nocturnal car-driving sequences, suspenseful music creates moods found in traditional films before succumbing to a soundscape of natural and artificial resonances. Godard orchestrates the soundtrack to create constant modulations and tonal shifts. The screen sometimes goes black. Inexplicable blood runs down a bathtub drain. “Is society willing to accept murder as a means to fight unemployment?” Godard provokes and dares the viewer to listen and think. Think for yourself. 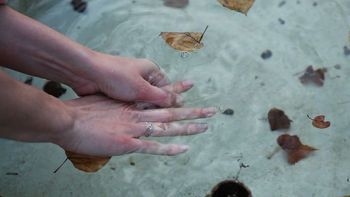 Employing the editorial collage technique he developed while making films with the Dziga Vertov Group collective (see “British Sounds” - 1969), Godard poses questions about culture, nature, war, and relationships between men and women in a context of how, what, and why people communicate. He foresees a near future when people will only be told by technology what to think and feel.
A government authority terrorist exits a black sedan to fire his gun into the air to threaten a woman whose fearless proclamation that she “doesn’t care” disorients the brute to the point of impotence.

“Infinity and zero” are touted by a male lover to man’s greatest discoveries until his girlfriend says that “sex and death” are more significant.

“Goodbye to Language” is a vibrant think piece about modern man’s constant state of fear of the Frankenstein culture of violence that governments and corporations have created. Godard views the dichotomy between nature and industrial degradation with a sardonic eye. God couldn’t humble man, so he humiliates him. Absurdly visually abstract, the film keeps its audience on their toes. “A dog is the only creature that loves you more than he loves himself.” Such deceptively simple observations overflow into the intimate relationship between two lovers whose frequently nude state finds constant acceptance, even during shared bathroom experiences. “Thought regains its place in poop.” Fritz Lang’s “Metropolis” plays on the living room flat-screen.

Godard pushes the flexible boundaries of cinema like a virtuoso avant-garde jazz musician painting colors on sound. That Godard uses his real-life girlfriend’s dog Roxy as a primary character though which we observe and contemplate man’s connection to nature, serves to endear the audience to an artistically liberated and fully expressed filmmaker with nothing to lose. Cinema doesn’t get any better.