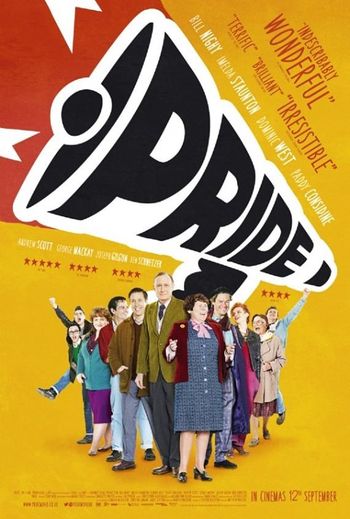 All attempts fail at forcing a by-the-numbers narrative template on a fact-based story about unlikely bedfellows uniting against Prime Minister Margaret Thatcher's mid '80s reign of anti-union and anti-gay rhetoric and public policies. Newbie screenwriter Stephen Beresford plays a game of hide-the-protagonist that further distracts from a diluted "feel-good" movie that should have by all rights been a slam-dunk.

London, circa June 1984, is the site of a Gay Pride march where 20-year-old Joe (George MacKay) is inadvertently lured into joining the parade in spite of his meek efforts to avoid holding a sign that reads "Queers — Better Blatant Than Latent." Still insecure about his own gayness, shy Joe comes out of his shell after being welcomed into the fold of a local gay rights group, home-based in a cozy neighborhood bookstore called Gay's the Word. Sidelining his culinary studies to be a pastry chef seems a fair exchange for Joe's sudden decision to follow his other passions.

Mark Ashton (Ben Schnetzer) is the charismatic gay rights firebrand whose impromptu mid-parade decision to represent a group of striking miners, as equally despised as the gays by Thatcher's vindictive regime, sounds a clarion call that eventually rings through in the UK's corridors of power. Mark rebrands the group from "Gay Liberation Front" to "Lesbians and Gays Support the Miners" (LGSM).

After taking up sidewalk collections, Mark transports his small but passionate alliance to the South Wales coal-mining town of Onllwyn to donate the monies to the miners' poorly articulated cause. Running with the idea that the enemy of my enemy is my friend, LGSM recruits the help of Onllwyn's able-bodied community club spokesperson Dai (Paddy Considine) to introduce them to the miners. Although the town's National Union of Mineworkers take seething umbrage at receiving support from such a group of "perverts," they don't turn down the money.

The film's neglect of the cause and nature of the miner's strike is a glaring oversight that also weakens its potential as serious work of agitprop cinema. 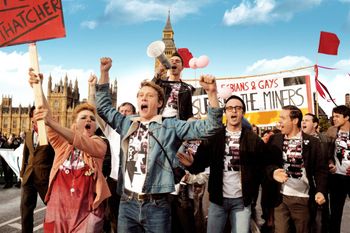 Rocks thrown, rather than the personalities of the bullies throwing them, express the era's cultural reality of intolerance. The film's broad comic tone undermines the seriousness of the sometimes-violent drama at hand. A perky musical score and colorful set designs that border on the garish exist at odds with the vital nature of the story. At times the movie feels like an Ealing comedy on steroids. Nevertheless, its use of Billy Bragg's version of "There is Power in a Union" plays all the right chords when it finally arrives.

Four too many subplots splinter the film as Mark's motley group of gays shuttle between London and Onllwyn's Dulias Valley town while drumming up more financial aid for the miners. Confusion arises about which character the filmmakers intend the audience to invest most of its interest in. Strong supporting performances from Dominic West, playing the first UK victim of the AIDS virus, and Bill Nighy, as Cliff, a retired miner who happens to be a closeted gay, help keep the film entertaining even if the movie doesn't add up to the sum of its parts. Even Imelda Staunton's feisty portrayal of Hefina, a community organizer in Onllwyn, gets lost in the shuffle.

Listed below are links to weblogs that reference PRIDE: