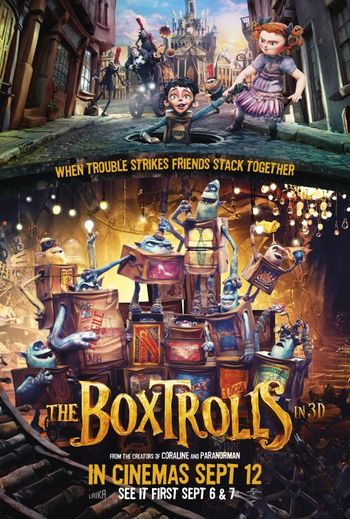 This animated 3D children’s picture is as clumsy, tone-deaf, and useless as they come. Laika, the Oregon animation production company behind “Coraline” (2009) and “ParaNorman” (2012) takes more than a few a steps backward. Rather than improving on their 3D efforts, “Boxtrolls” holds less visual interest than most 2D animated films. If the filmmakers don’t intend to use 3D effects to their fullest extent, i.e. breaking the proscenium window to put objects in front of viewers’ eyes, then there is no point in indulging in the expensive process in the first place. Uneducated audiences and critics may not know what they’re missing, but if you’ve seen “My Bloody Valentine 3D,” you know what I’m talking about. Even Jean-Luc Godard’s latest film — his 3D enhanced “Goodbye to Language” — makes far better use of the technology than what you see in “Boxtrolls.” Darkness of images is another problem that “Boxtrolls” suffers from.

Although the movie is based on a children’s’ novel (by Alan Snow), the story seems artificially generated to make a profit at the box office, rather than contribute on any instructional level for children.

Populated with senseless throwaway characters called boxtrolls, the equivalent of “Despicable Me’s” physically, mentally, and speech impaired “Minions,” the action is set in the town of Cheesebridge, a 19th century UK location. Boxtrolls are an all-male species of squat, blue-skinned nocturnal “monsters” that wear boxes to cover their otherwise nude bodies — read genitals, or lack thereof since they seem to not have female partners with which to procreate.

Aside from their deathly pallor, boxtrolls are notable for the black band that surrounds their eyes, making them resemble silent-era bandits wearing cloth masks. The dim-witted beings live up to their criminal appearance. At night, the boxtrolls go around town stealing anything that isn’t nailed down, and some things that are. Address numbers from publically exposed doors are ripe for the taking by the little misshapen beasts that ostensibly symbolize homeless (possibly immigrant) peasants. 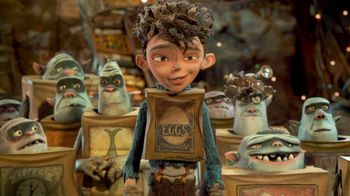 The boxtrolls rescue a human baby boy (Issac Hemstead Wright), believed by the public to have been kidnapped after the boy’s father, Herbert Trubshaw (voiced by Simon Pegg), was brutally murdered. The boxtrolls raise “Eggs” (the word printed on the box the boy wears as a shirt) as one of their own.

Meanwhile, Archibald Snatcher (voiced by Ben Kingsley) is secretly a cross-dressing entertainer known as Frou Frou who is obsessed with leveraging his way into the town’s white-hat-wearing nobility so that he can partake in their private cheese-tastings. Snatcher imagines that if he can kill off all of the boxtrolls that plague the town, that Lord Portley-Rind (Jared Harris) will hand over a white hat that will elevate him to one of the town’s aristocracy. That Snatcher is horribly allergic to cheese hardly dissuades him in his quest, although it does allow for some truly grotesque episodes of flesh swelling.

Lord Portley-Rind is the king of the town’s castle, and father to Winifred (Elle Fanning), a gore-obsessed girl who befriends Eggs. Winnie takes responsibility for dressing and socializing Eggs, who may as well have been raised by wolves.

Visually and thematically, the movie is all over the place. Clearly, the creators at Laika have yet to receive the memo that Steampunk is passé. The limited appeal of Rube Goldberg mechanical machines has passed its date of expiration, and yet wonky gears are all over the movie as a substitute for any purposeful use of imagination.

From a political perspective, the movie’s “Dare to be brave” and “Dare to be free” message is directed toward its lower-class boxtroll members of society. The end of the story indoctrinates these mentally and physically inferior “monsters” into civilization as menial workers; guess who’s washing your dishes at restaurants in the town of Cheesebridge?

Hooray for the formerly oppressed and their sad capitalist victory. No longer will they have their own personalized, private society, but rather they will be subject to all of society’s laws, taxes, and public humiliations even if they never learn to speak.

Laika’s first two films (“Coraline” and “ParaNorman”) were about the extraordinary value of the outlier. “The Boxtrolls” is about how a group of outsiders is sold out by its own humanitarian effort to save a “human” boy. As in America, and in England, no good deed goes unpunished. You, and your kids will love this movie, not.

Listed below are links to weblogs that reference THE BOXTROLLS: