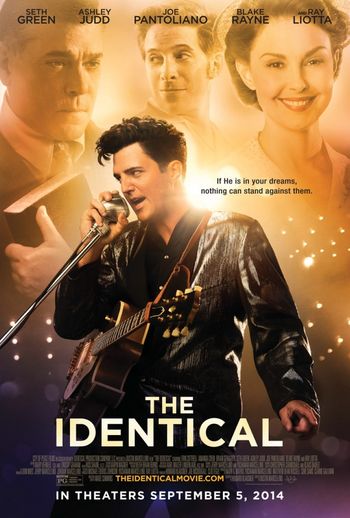 A shoo-in for a spot on any worst movies of 2014 list, this poorly constructed slice of propaganda, courtesy of the Messianic Jewish Alliance of America (MJAA), is so unintentionally campy you can’t help but laugh. Atrocious costume designs, anachronistic dialogue, wretched music, and tone-deaf performances are abundant.

It’s rare that a film as amateurish as this one gets a wide North American theatrical release, or that such a dubious project drags down two otherwise reliable Hollywood B-list actors with it. Remember Ray Liotta and Ashley Judd? How the nearly mighty have fallen. From the looks of it, you’d never guess that Ashley Judd (“Kiss the Girls”) and Ray Liotta (“Goodfellas”) were once hot commodities in Hollywood. Here, Ray Liotta gives such an unbearably hammy performance, in a make-up heavy role that spans roughly 35 years, that you wonder why he isn’t doing community theater — or community service — in Salinas. If Liotta’s aging process is embarrassing, Judd’s performance, as Liotta’s non-aging Southern wife with the IQ of a child, is plain bizarre.

Hopefully the MJAA compensated Liotta and Judd for decimating their future earnings potential.

Screenwriter Howard Klausner must have used a ghostwriter to pen his only previous script, the Clint Eastwood-directed film “Space Cowboys” (2000), because Klausner’s cliché-riddled screenplay for “The Identical” is something you’d expect from an underachieving high school student.

Watch as a slimy entertainment manager throws handfuls of cash into the air! Listen to the worst Southern accents you’ve ever heard! Marvel at a plotline so pretentious even a five-year-old wouldn’t buy it!

Debut director Dustin Marcellino was presumably given the gig by his Motown record-producing grandfather Jerry Marcellino, whose ludicrous attempts at writing original [partial] rock ‘n’ roll songs pepper the movie like so much aural dishwater (as sung by a very skilled Elvis impersonator). Cringe-worthy lyrics arrive at regular intervals during stage performance sequences that go on too long regardless of their strict 90-second abbreviated form.

The film’s preachy religious and political narrative stretches back to the Great Depression. William and Helen Hemsley are a young unemployed Christian couple with more dumb lust than common sense. They follow the Bible’s teachings to “be fruitful and multiply” in spite of the fact that they can’t even feed themselves. The couple’s identical twin offspring present more economic strain than they can handle. A visit to a Bible-thumping sermon by Reverend Reece Wade (Liotta), an ostensibly Baptist minister with Jewish leanings, plants in William the idea that “it is better to give than to receive.” Reverend Wade underscores the oversimplified ethos of his rote sermon with the over-shared disclosure that he and his wife Louise (Judd) are unable to procreate.

The next day, William and Helen pay a visit to the Reeces with an offer to hand over one of their twin children to appease their dilemma. Oh the transgressive blessings at hand. The Hemsleys conceal their well-meaning deed by claiming the death of their child. They go through the motions of a minister-attended burial, complete with an empty shoebox coffin. 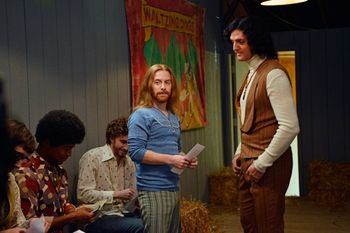 Years pass. Enter Elvis impersonator and real-life Elvis lookalike Blake Rayne (real name Ryan Pelton) in the dual role of the Hemsley’s separated-at-birth twins Ryan and Drexel. Although minister Reece tries to bring Ryan up to follow in his footsteps as a preacher, Ryan can’t resist the boogie-woogie calling of the devil’s honky-tonks on the outskirts of town. No one seems to notice that Ryan sings exactly like the King. This must be an alternate universe. Indeed, when papa Wade gives a ridiculously oversimplified sermon, praising Israel’s victory in the 1967 Six-Day War, he goes so far as to bring out an inexplicable menorah for his Christian congregation to scratch their heads over.

Ryan and Drexel look and sound exactly alike, except that Drexel is a successful rock ‘n’ roll recording artist, and Ryan is a talented wannabe who fails to recognize his resemblance to Drexel as anything more than a weird coincidence. Ryan is content to sing along to his brother’s records and perform at local amateur night competitions. Forget about any willing suspension of disbelief; “The Identical” is all about blank naiveté. Even when Ryan and Drexel come (nearly) face to face, neither one calls out their obvious blood relation.

Presumably, the Messianic Jewish Alliance of America produced “The Identical” (under their City of Peace Films company) to intangibly drum up Christian support for Israel. There’s coincidence in the fact that the movie opens at a time when Israel is coming under fierce global criticism for its military actions against Palestine. This is a movie you can laugh at, but you won’t be able to enjoy.

Listed below are links to weblogs that reference THE IDENTICAL: