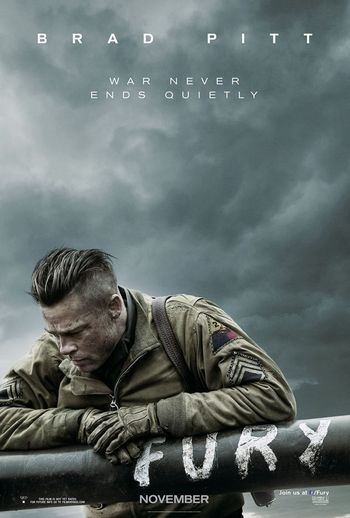 Writer/director David Ayer’s World War II drama is a gritty European-style coming-of-age picture that reminds us how much war has changed in the past 65 years yet how much it remains the same. Even if the American soldiers who fought in the Good War were as blindly subordinate as modern-day military enlistees, they were cut from a harder timber, a kind of hardwood that doesn’t exist anymore. As for the many thousands of modern day corporate-funded mercenaries who play at every form of military skullduggery imaginable at home and abroad, that’s another subject.

The “Fury” of the film’s title is the nickname given to an American platoon’s M4 Sherman tank that serves as their fetid mobile home and method of survival. The ominous moniker is written large on both sides the tank’s giant 76mm gun. “Fury” may be the only World War II movie about a tank crew ever made.

Although it’s not based on any historically accurate narrative about an actual mission or even a real-life tank platoon, Ayer’s composite historic sketch brings together interesting factual elements. For example, Michael Peña’s Fury crewmember Trini “Gordo” Garcia represents one of the more than 350,000 Mexican men who fought for the American armed forces during World War II.

It’s April 1945. Allied victory is months away. Germany’s sturdier Leopard and Tiger tanks are eating up tin-can American Shermans at a rate of ten-to-one on the Western front. American soldiers are vastly “outgunned and outarmored.” 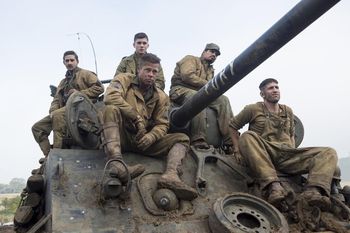 In the role of 3rd platoon tank leader Sgt. Don “Wardaddy” Collier, Brad Pitt’s compact portrayal errs on the side of Audie Murphy rather than the campy Lt. Aldo Raine character he played in Quentin Tarantino’s war fantasy “Inglorious Basterds.” Audie Murphy was a decorated World War II soldier-turned-Hollywood actor who enjoyed great success staring in westerns. It’s not that Wardaddy isn’t just as obsessed with killing Nazis as Lt. Raine; it’s all he lives for, apart from keeping himself and his crew alive. Having led the same handful of men though years of battles against German soldiers in Africa, Belgium, and the Netherlands, before losing his prized machine gunner in combat, Wardaddy is as battle-hardened as they come. Still, like the traumatized men who make up his tightly wound crew, Sgt. Collier is damaged goods.

Ayer establishes Wardaddy’s coldblooded instincts in a shocking opening scene where the America soldier rises from a corpse-covered German battlefield to ambush a German soldier riding on a white horse. Wardaddy slams his knife blade deep inside the Nazi’s skull though his eye socket with blinding speed. Kill or be killed.

The latest threat to Sgt. Collier’s tank crew comes from Norman Ellison (Logan Lerman), a tenderfoot Army typist trained to type 60 words a minute. Norman is assigned to take over machine gun duties in the Fury. His first task is to wash all of the blood off the tank. The severed face of a Nazi soldier — eyeball included — must be disposed of.

During the single day that the story takes place, Wardaddy and his crew indoctrinate Norman in the brutal demands of their job — a job that pays $1.38 a day. The Fury’s crew like to chant, “the best job I ever had.” 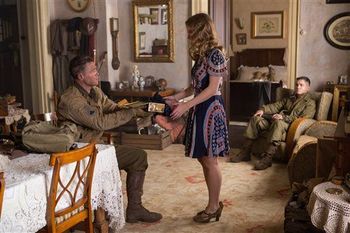 The film’s centerpiece sequence exposes the paradox at the heart of the story. It takes place inside a quiet German apartment where a mother and her teenaged daughter hide in justifiable fear. Having taking notice of the women from the street below, Wardaddy takes Norman upstairs to introduce themselves to the German female civilians. The mother (Anamaria Marinca) toils in the kitchen to prepare food for her American guests while Norman and the woman’s daughter Emma (Alicia von Rittberg) get acquainted. The similarly aged young couple shares an immediate attraction in spite of their countries’ warring condition.

Wardaddy shaves and takes a sponge bath in the dining room. His back is covered in thick burn scars. He advises Norman to take the “good, clean” German girl to the bedroom, or else he will. By the time a meal is prepared, Norman and Emma have inked their mutual temptation in bodily fluids. As if smelling the scent of sex, the Fury’s remaining three-crew members burst in the apartment demanding their next turn with the girl. The freshly cooked meal and the availability of alcohol temporarily distract them. The tension that mounts is unbearable. This is the scene that explains why David Ayer made the film, and why “Fury” is a great movie.

War is hell. When will America stop starting them?