Mike Leigh’s reputation as an unrivaled inventor of cinematic dramaturgy once again over-delivers on his promise. How, you might ask, is that possible? Such is the nature of Mike Leigh’s incomprehensible genius as a truly visionary auteur.

Leigh’s celebrated rehearsal methods involving months if not years of improvisational preparatory work on the part of his cherished actors, renders astonishing results in the telling of J. M.W. Turner (1775-1851), the English Romantic landscape painter who greatly influenced the Impressionist movement.

Leigh’s frequent thespian ally Timothy Spall puts head, heart, and loins to the character of Mr. Turner, a corpulent man tormented by his past relationship with his cruel and deceased mother. A finer performance you may never witness during your lifetime. Timothy (or “Tim” as his fellow actors call him) Spall is cinema’s best-kept secret, but not for much longer. Measured, generous, and rich in emotional depth, Spall’s portrayal of Mr. Turner is a thing of priceless glory. The years that Spall spent learning to paint, specifically for the part, have surely paid off in this tremendous film.

The filmmakers’ brilliant use of natural lighting give the audience a vibrant visual sense of existing in the proximity of visual reference points of Mr. Turner’s lush paintings, many of which carry a marine theme.

Breathtaking attention is paid to every aspect of period detail, toward immersing the viewer in 18th century London and its nearby coastal environs of Margate, England where Mr. Turner frequently travels for artistic and romantic inspiration. Still, nothing is overwrought. Perspective and composition exist in context.

Turner’s complex relationship to women provides the story with a wealth of psychological subtext that nonetheless is subservient to the painter’s daily work, which takes center-stage. The rebellious painter's proclivity for visiting the same seaside bed-and-breakfast guesthouse is inspired in part by the home’s thrice widowed owner Sophia Booth (Marion Bailey), with whom Turner eventually strikes up a romantic relationship that serves the couple well during the later years of his life.

The death of Turner’s painting-assistant father proves a turning point for the painter, and for the film. After his father’s funeral, the abject Turner chooses to visit a brothel whereupon he releases his emotions rather than any sexual energy he may possess. The scene allows Timothy Spall to dig deep into his character’s well of pent-up anxiety and remorse. 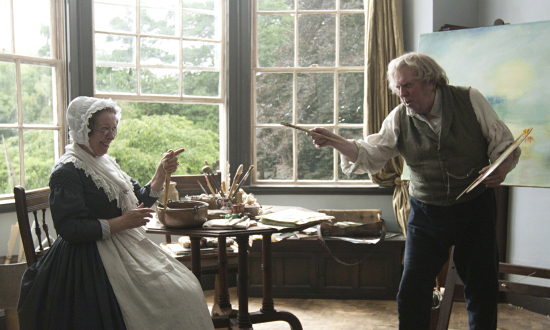 J. M.W. Turner was a misunderstood artist during his lifetime, but with the help of Mike Leigh, Timothy Spall, and a cast of infinitely gifted actors, audiences can begin to comprehend the life, purpose, and experiences of that tremendously inspired soul.

It is worth noting that the stellar performances from Leigh’s stable of actresses such as Dorothy Atkinson, Marion Bailey, and Ruth Sheen are all of an elevated quality rarely experienced by modern movie audiences.